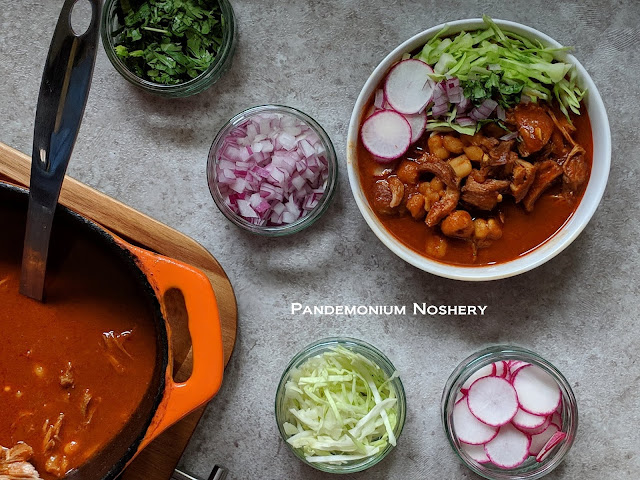 Mexican cooking for me is always a challenge, it's really hard when googling to separate real Mexican from Tex-Mex, so when a friend told me how her family has always made theirs I knew I had to try it. It's such a simple recipe and so packed with amazing flavor.

I did chance a few minor things, which helped the recipe cook faster. This isn't a quick recipe by any means, but I cut an hour or so of simmering using seared pork ribs instead of a larger cut of meat.

I've made this a few times and learned a couple things along the way. The first was the that I am used to making soup with broth and so I use chicken broth in place of the water. It was interestingly intense and I prefer the flavor without. The second is don't skimp on the toppings. I didn't bother the first time and while we enjoyed it, I really miss the fresh crunch of the vegetables.

In a large pot, I prefer cast iron, heat about 2 tablespoons of oil, just enough to sear the meat. Season the pork lightly with salt and cook in batches, making sure not to crowd the pan. Brown on both sides.

Cover with water. Add the bay leaf, garlic, chili, cumin, red pepper, and black pepper. Cover and simmer for about an hour, or until the pork is almost tender.

Add the enchilada sauce and the hominy and simmer an additional 45 minutes.

Remove the pork and remove the fat, and bones if using bone in, and shred the meat before returning to the pot. 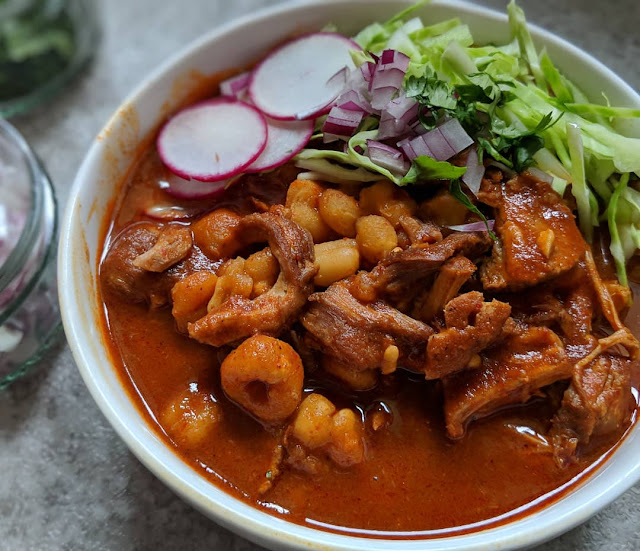