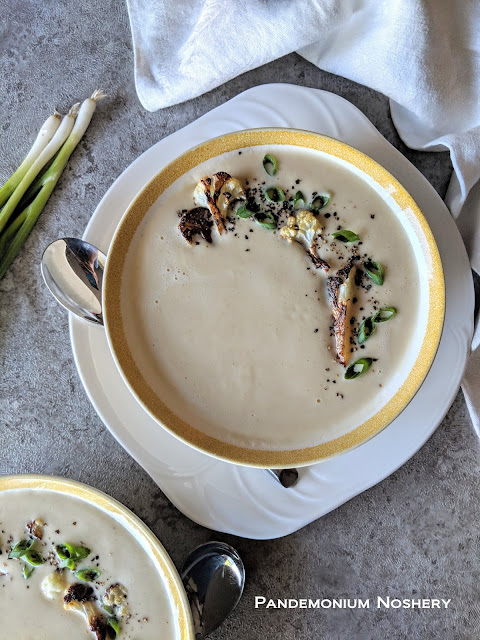 Despite being the middle of the summer I really wanted some hot soup last week. I've made a version of cauliflower soup for years that is quite similar but I wanted something I could post about and so I started my usually search and came across this version with the added egg yolk. It added a richness to the soup that was delicious with the homemade chicken stock. My own take is roasting the cauliflower instead of boiling it. I like the toasted flavor it imparts.

Chop the cauliflower in to florets. Toss with a little olive oil and salt. Roast at 450 until golden and cooked through.

Meanwhile in a large pot melt the butter. Add the flour and cook, stirring, for about 5 minutes. You do not want it to brown, just cook through. Add the chicken stock and the nutmeg and simmer until the cauliflower is cooked.

Add half the broth and all of the cauliflower to a high powered blender. Blend on high until really smooth. While the blender is still running add the two raw egg yolks and blend for several minutes. Return to the pan with the remaining broth and the cream. Heat very gently over medium heat until warmed through. Do not allow to boil or the egg will separate. Taste for salt and pepper.