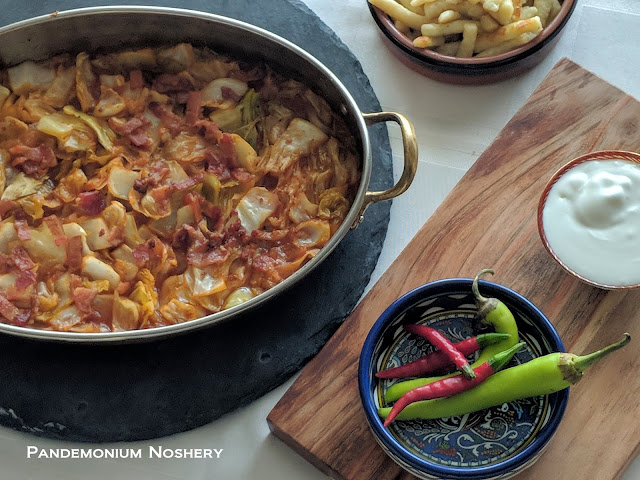 This delicious Romanian recipe popped up on my facebook feed from The Bossy Kitchen and I knew it was what I was going to be making with my leftover head of cabbage. After looking around at other Romanian stewed cabbage recipes and because it was a last minute idea, I changed the recipe around a teeny it. I didn't have any crusty bread on hand so ate it with the leftover spätzle from the night before. It was delicious.

In a medium pan fry the bacon on eat side until cooked. Do not cook until crisp, it will cook more in the oven later. Remove from the pan and set aside.

Crumble or chop the ham and add to the bacon drippings over high heat to cook the ham. Add the onion and cook until they are starting to look tender. Turn the heat up to high and add the vinegar. Cook until it reduces and isn't acidic smelling anymore.

Chop the bacon and sprinkle on top of the cabbage but don't stir in. Bake at 350 for 30 - 45 minutes or until the cabbage is caramelized on top.