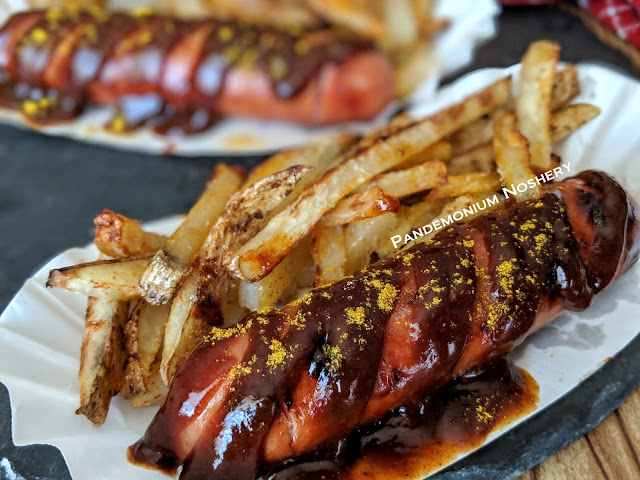 Currywurst is a delicious German street food comprised of a bratwurst cooked and sliced served with a curried ketchup sauce and usually French fries on the side. Originating in Berlin the dish is now common in more places throughout the country.

Local lore has it that a German housewife in the late 1940's traded American soldiers for ketchup and created the dish. The legend is disputed, but what isn't is how well curry and ketchup go together, especially on a bratwurst.

For the French fries I used Smitten Kitchens oven fries method. Don't misunderstand, I still real, fries, French fries, but I hate actually frying them myself. This method of boiling and then baking them really did turn out amazing and I will be using it again. The texture was perfect.

For the sauce
Combine the ketchup, curry, paprika, onion powder, and Worcestershire sauce in a small saucepan until hot. Stir in the water and keep simmering until combined. Sift the baking soda in to the pan. It will start foaming up but keep stirring until it returns to a normal sauce. Simmer over low heat until the bratwurst and fries are cooked.

For the Fries
Peel the French fries and cut in to French fry sides strips. I did this part the night before and soaked them in water.

Simmer in salt water until just barley not quite cooked. You don't want them to be soft, the crunch is still needed to retain their shape when you toss them with oil. Once they are softish drain and drizzle in the colander with oil. Transfer to a baking pan and season with paprika, garlic powder, pepper, and salt. Roast at 450 until golden brown, about 20 - 30 minutes.

For the Bratwurst
Slice the bratwurst partway through as if you were slicing it, but leaving them still in tact. The last 10 minutes of roasting the French fries place the bratwurst on the pan in the oven.

To eat
Divide the French fries on to 4 plates. Give each plate a bratwurst and drizzle with the sauce. Dust with additional curry powder and serve. 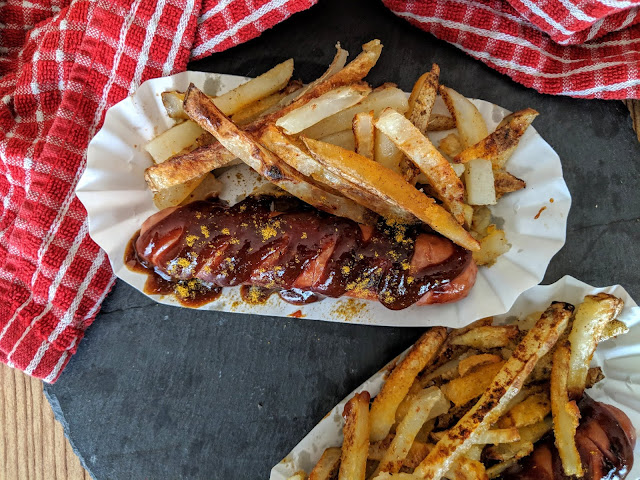