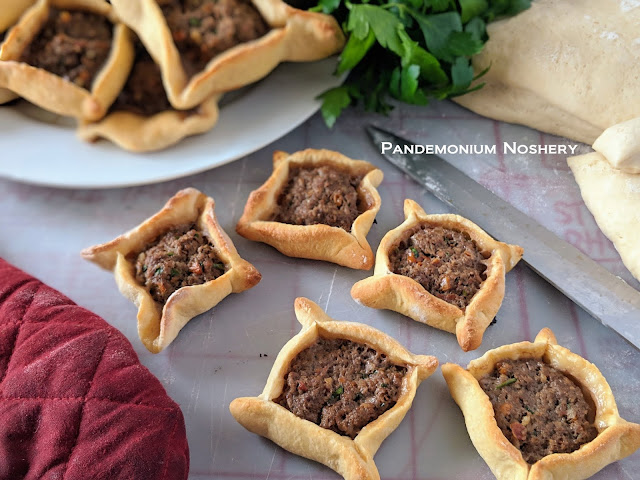 Two things pretty high on my fairly extensive list of foods I like are Middle Eastern food and meat pies, and sfeeha is both. The delicious meat is spiced with baharat and tangy pomegranate molasses and simply delicious. Hadia's Lebanese Cuisine is one of my favorite blogs to follow and when she posted them they didn't even go on my three page "to-make" list, they went on the menu for that weekend.

One of the issues I had with my first tray was the moisture in the meat, even after draining, cause them to open up. They were still delicious like that but didn't have the right look. I added some matzo crumbs and it solved the problem.

Another thing I learned is to take them out of the oven before you think you need to. I wanted to leave them in at first until they wasn't any visible moisture left but once I took them out and they sat a few minutes they got really dry. Take them out a little earlier and the meat absorbs the liquid and they stay juicy.

I also learned that putting a large portion of the meat mixture in the middle meant they came apart and were slightly soggy. Put a wide, flat, amount of meat mixture on the bottom. It cooks without messing up the dough and looks more like they should.

But know, if you don't have ones that look picture perfect, like my first several pans, they will still taste amazing. 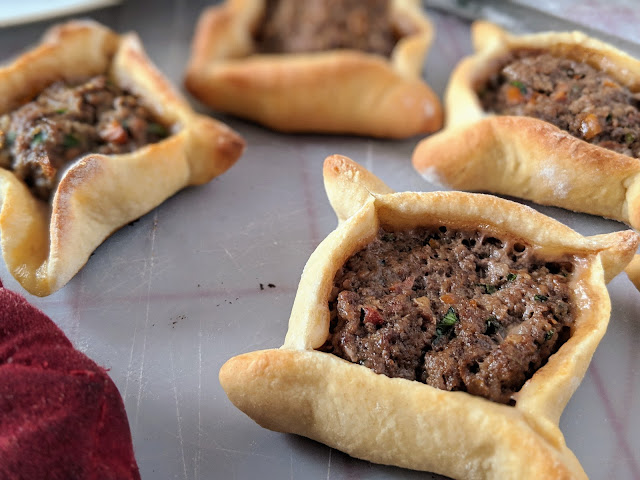 In a food processor combine the onion and tomatoes and grind until tiny pieces and well mixed. In a separate bowl combine the beef, tomato and onion mix, salt, baharat, pomegranate molasses, pine nuts, and parsley.

Use your hands to mix well. Place the mixture of a strainer and leave for 10 minutes to allow extra moisture to drain off. Mix in the bread crumbs and set aside.

Combine the milk, honey, and yeast and stir slightly. Leave to proof for 5 minutes.

Pour in the oil and stir slightly. Dump all of the flour on top of the milk and yeast mixture along with the salt. Stir with a wooden spoon until as mixed as you can get it. At this point it might be kind of dry and clumpy but that is ok.

Dump the mixture on to a clean floured surface and knead until smooth.

Place the dough in a large bowl. Cover the top with a damp dish towel and place is a warm dark area. Allow to rise until it has doubled in size, about 45 minutes.

To Assemble - Pre-heat the oven to 425
Break the dough off in balls slightly smaller than a golf ball. Make sure the remaining dough is covered with a slightly damp cloth so it doesn't form a crust. Roll the dough out in to a 4 inch disk.

Place about 2 teaspoons of the meat mixture on top of the dough and spread almost to the sides. Pinch one spot of the dough and then the spot directly across from it. Once those two are pinched pinch the ones between it together as well so you have four done.

Bake at 425 until browned around the edges and the meat looks cooked but there is still some liquid around it. 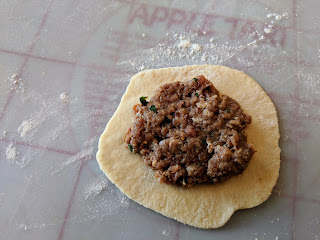