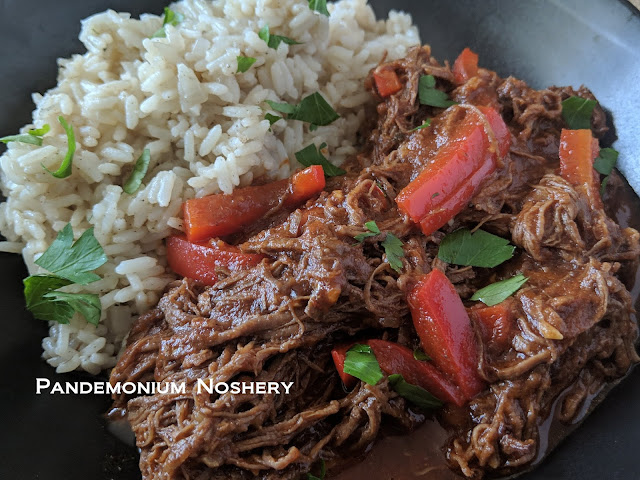 Who here has seen The Finder? It's on Netflix and it's about a crazy eccentric veteran that is gifted at finding things. And it's goofy, and quirky, and ridiculous, and I love it. Episode 8 "The Last Meal" they have to track down a famous chef, recreate a nostalgic meal and expose a crime boss. OF course they do it, but the real highlight of the episode is the crazy shenanigans ropa vieja. Without it they wouldn't be in that crazy situation.

So what IS ropa vieja? It's one of the most iconic Cuban dishes, a combination of long and slow cooked beef, tomatoes, and lots of seasonings served with rice, black beans, and maduros. The dish originally comes from the Canary Islands and was a stew to use up leftover meats. The Canary Island version uses chicken, beef, and sometimes pork. The Cuban version is so popular, people cook the meat specifically for this. And once you try it you will know why.

Make sure when picking a cut of meat it is one that has the grain running lengthwise through it, you want long shreds of meat. Despite the long cooking time the meal is perfect for an easy dinner. I start the marinade the night before so the following morning all I need to do it sear the meat and start simmering. From there I check it and shred when I can. The next part takes about 5 minutes and the sauce is better the longer it sits. Then for dinner cook a lot of rice and a side salad and you are good to go.

My family isn't in love with cooked olive. Despite loving them as a snack, and snarfing them down as fast as they can, I learned with the picadillo it's not something they liked heated up. So I serve those on the side for those that want them in theirs. Like me.

Slice the flank steak across the grain in to thirds and then in thirds again the other way. In a large zipper seal bag combine the lemon juice, soy sauce, adobo, oregano, cumin, pepper, liquid smoke, garlic, and onion. Mix to combine and the add the flank steak. Massage the bag to mix well and allow to marinate in the fridge over night.

In the morning heat half the oil in a large cast iron pan. Sear the meat in batched, without crowding the pan, until all the meat is seared on both sides.

Add all the meat back to the pan along with the remainder of the marinate, the bouillon cube, and the two bay leaves. Add enough water to cover and allow to simmer for at least 2 hours, or until the meat pulls apart easily with a fork.

Remove the meat from the pan with a slotted spoon and set aside. Leave the liquid simmering on the stove to reduce. You want it to be about 3 cups worth, thought he exact amount isn't important.

Simmer for about 10 minutes, stirring often so it doesn't burn on the bottom.