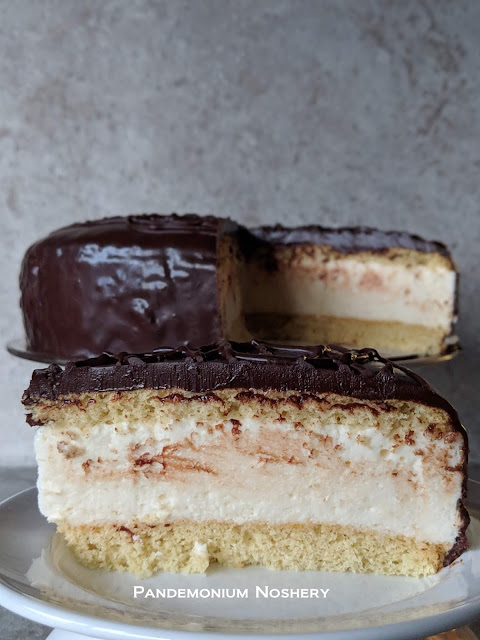 Bird's milk candy is a delightfully spongy, marshmallowy, candy bar enjoyed in Eastern Europe, though originally from Poland. This popular cake is modeled of the candy bar. It is believed in Russian legend that birds milk is such an exotic and rare ingredient that it is impossible to find, similar in idea to the Greek ambrosia, the food of the gods.

Indeed, in Soviet era Russian when the candy was invented, the originally cake was only made in the capitol. The cake was so hard to get a hold of because the recipe was such a closely guarded secret. Many kitchens in Russia tried to recreate the prized dessert and so there are many, many versions of the recipe floating around. I created this recipe after much tweaking each time to resemble the candy version in both taste and texture and I'm thrilled to finally be posting it. For two reasons really, the main one being that I finally perfected the recipe but also so I can stop making it, too much of a good thing and all that.

For the cake
Pre-heat the oven to 375

In a bowl beat the egg yolks and 1/4 cup sugar until pale in color and thick. Sift the flour and salt over the top and fold in.

Pour the mixture in to a prepared pan and place in the oven. Cook for 15 minutes or until the top is springy but not browned.

For the Bird's Milk Filling
Combine the water and gelatin and set aside for 5 minutes. Cook over medium heat for 3 minutes until the gelatin is dissolved. Set aside again to cool.

Beat the butter and sweetened condensed milk until light. Fold in the vanilla and sour cream.

Whip the heavy cream and sugar until stiff peaks form, about as much as you can beat it without making butter.

Fold the whipped cream in to the sour cream mixture. Drizzle the cooled gelatin over the top and fold in as fast as you can.
Assemble
Place the bottom later of the sponge cake in the bottom of the spring-form pan. Pour all the filling mixture in to the pan and spread to smooth to the edges. Top with the remaining cake layer and press gently in to the top.

Chill for 8 hours or until firm. Remove from the fridge and run a knife around the edges to loosen. Remove the sides but not the bottom and place on a cooling rack inside a cookie sheet.

Pour the ganache over the top and make sure the sides are coated. Place back in the fridge for 30 minutes to set the chocolate.