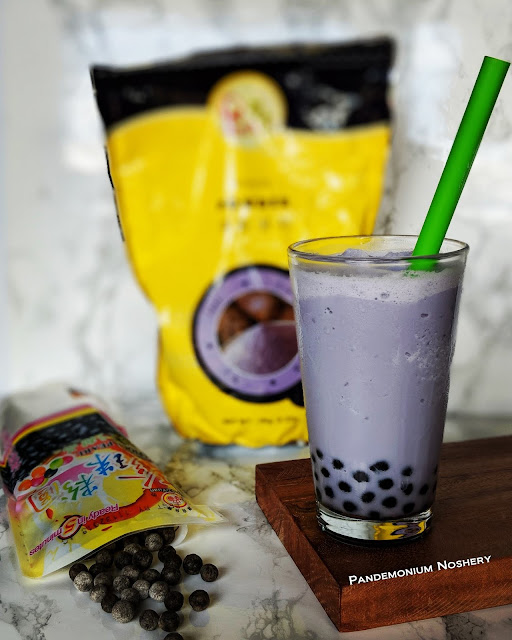 Years ago a friend asked if I had ever had bubble tea and I really hadn't. I don't drink tea so I had always just ignored it but it turns out the milk teas don't actually contain any tea and so I decided to try it. And then didn't. And didn't. And here I am 7 years later thinking about them and I decided to just amazon a bag of pearls and I would make my own. Only I still didn't and got to try some at a festival and fell in love. And so for my Mothers Day this year I got a bag of taro powder and have been making them every since.

The bubbles don't have to go in the sugar syrup but the don't taste like much without it. With it they are like bouncy gummy bears that are really fun to suck up in the straw and chew. They don't keep however, they get hard in an hour or so, so only make a many as you are going to eat right away.

When I was looking at how to make them most blogs and youtube videos said to boil them for 20 minutes. My bag said they were ready in five minutes and they almost were. It wa just about five minutes from the time they floated to the top. Mine also didn't need the rinse afterwards. I just lifted them out with a slotted spoon and put them directly in the sugar syrup.

While they are boiling microwave the sugar with 2 Tbsp. water.

Remove the bubbles from the boiling water when soft and add to the sugar syrup. Stir to combine and set aside.

In a blender combine the coconut milk and taro powder. Blend until smooth. Add the ice and blend again until smoothie consistency.

Divide the bubbles between two glasses, top with the taro slush.