Last month I was scrolling through Facebook one morning when I saw a post by a fellow international food blogger that caught my eye. It mentioned she was posting for Eat the World Recipe Challenge, and my first though was "how can I get in on this?!?!?!?" That totally sounded like something I would love.

This month's country is Kenya. Though not somewhere I have personally been, I have a good friend that has so I was doubly excited for this theme. My friend even generously allowed me to use a few of the pictures she took on her trip. Both landscape photos are hers.

A little about Kenyan cooking from Kenya Cooking Guide helped understand a little about the cuisine. I recommend checking them out, there is a lot more info there. I also learned researching this that "jikoni" is the Swahili word for kitchen.


"The most popular foods in Kenya are fresh foods from the country's vast
resources. Farmland, lakes and the Indian Ocean provide readily available
vegetables, fruits and meats. Often, the ingredients used to prepare a
Kenyan dish are fresh, very cheap and easily used to make a quick
meal. Common vegetables include kale, spinach, cabbage, tomatoes,
beans, potatoes, avocados and other leafy greens, while beef and
goat meat are the common meats served in a Kenyan meal.
Fish, chicken, and mutton are available but are more expensive.

Tropical fruits such as mangoes, oranges, pineapples, bananas, papaws, and
pears are cheap, plentiful and popular on Kenyan tables, their availability
dictated by the season. Other ingredients used in typical Kenyan dishes
and recipes include rice, corn meal, and wheat and millet flour. Kenyans are
avid tea drinkers, thus hot beverages such as Kenyan tea and coffee
are often served with meals. Cold beverages like soda, juice, and domestic and
international beers are also available in restaurants, hotels, pubs and entertainment
spots. Tusker, a Kenyan beer, is the relaxing beer of choice for most Kenyans."

Trying to narrow down which dish to make was difficult so in the end I settled for all four. But then as I was reading through one of the recipes I plan on using there is a line a the bottom that says "Leftovers can be used in sukuma wiki". Which means now I have five. So stayed tuned to see some more of what Kenya has to offer and check out my previous posts about Githeri and Kachumbari. But enough talk, lets head to the jikoni to cook! 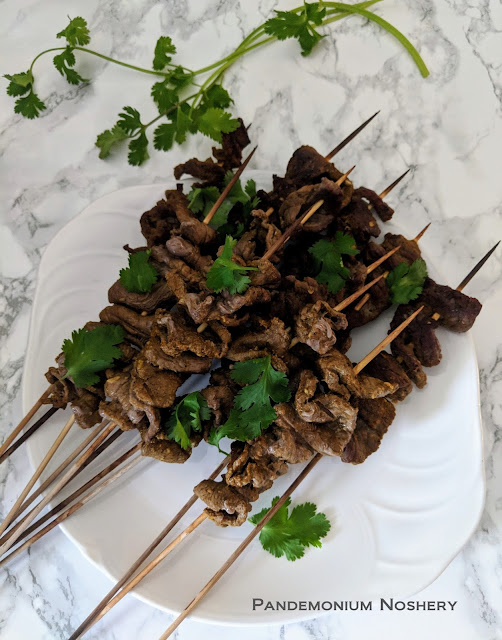 Combine everything but the meat in a gallon ziplock bag or large bowl. When the marinade it thoroughly mixed add the meat strips and massage the bag to combine or stir in the bowl to coat.

All to marinate for at least 1 hour, or do that part in the morning for an easy dinner later.

Back and forth, skewer the meat, several pieces to a skewer.

Place a cookie cooling wrack on a cookie sheet with sides. Place as many skewers on the tray as you can without having them touch. I did this in three batches.

Without turning over, broil the skewers until cooked through. Repeat with remaining skewers.

Serve with irio or pilau and kachumbari. 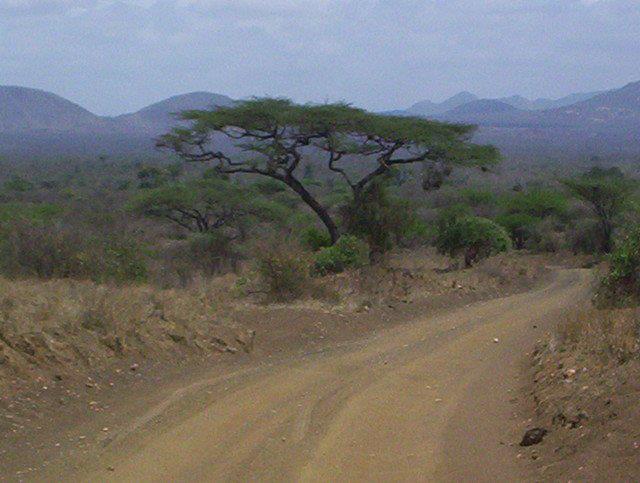 Check out all the wonderful Kenyan dishes prepared by fellow Eat the World members and share with #eattheworld. Click here to find out how to join and have fun exploring a country a month in the kitchen with us!