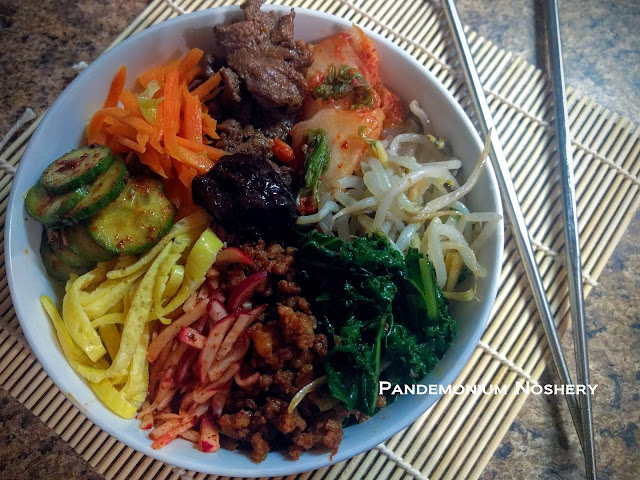 Another great tip I got from my fabulous friend was about bibimbap. Now it's a pretty common place dish in my house but initially it took a lot of research to try and make sure I got it down. The basics are this, rice, which is really the base of any good Korean meal, gochujang, and bonchan, or side dishes. The side dishes are what makes it both delicious and pretty simple.

It's basically whatever you have on hand. If you keep Korean sides in the fridge pull them out and enjoy. If not a few are pretty simple to prep. And finally meat is added to make this a complete meal. Bulgogi is pretty typically but in a pinch i've made this with leftover shredded turkey and with a quick ground pork recipe we really love. I use Maangchi's Stir Fried Pork Recipe with ground pork. It makes it really fast and easy to cook and it tastes delicious. We enjoy that over rice or in lettuce wraps. In mine above I have both.

The sides I have in the picture above are kale, radish, mung bean sprouts, kimchi, cucumbers, carrots, bulgogi, stir fried pork, egg crepe strips, and of course gochugang. Previously in this post I had talked about getting a tub of gochujang and it smelled terrible so I nixed the idea until I found Mother In Laws sauce. My friend said the sauce was good, but not really the same so I eventually went back and got another tub. It was night and day. I think the kind I had before had just gone bad. So while I do still enjoy The MIL brand it's more like a gochujang sauce, and not a nice spicy glob of the paste itself. Either will be delicious.

Kale as a bonchan is not really authentic. There are plenty of green side dishes but kale is not a Korean vegetable. However it's my favorite leafy vegetable and reminds me of my grandpas garden growing up.  It was also one of the things I got the very first time I tried bibimbap at a Korean fast food place in a mall. I love the garlicky taste and the texture it added. Replicating it years later wasn't really hard once you know the basics of Korean flavors.

Korean radish is a but different in taste than regular tiny American radishes but since I had half a bag of them on hand I used them anyway in this and it tasted delicious. I also only made a tiny amount since I was making so many other things at the same time but feel free to double or triple the recipes. I can't wait to make it again for myself to eat as is.

And to the egg crepe I have in mine above. Bibimbap dolsot is served in an earthenware pot that helps retain quite a bit of heat. A raw egg is cracked on top and as it is stirred up the egg is cooked.  Without the earthenware, in a regular bowl, the egg is fried separately and served on top. However in a hurry like I was, and also not knowing how many people would want and egg on theirs, or even those that did if they would want a whole egg, I did strips of egg crepe. A technique I learned watching other maangchi videos.

To shred the green onions I cut them lengthwise as many times as I could and then at half an inch intervals. It's not really important, I just wanted a different shape to them. Combine the onions with everything except the kale ad the water. Set aside.

Place the kale leaves in a large metal bowl and pour the boiling water over them. Stir a little so all the leaves are covered and leave for 1 minutes. Place in a colander to drain and leave for about 5 minutes but do not press on the leaves. They will release too much moisture and get too dry. Remove and cut in to ribbons.

Combine the drained and sliced kale and the dressing. Use your hands to massage together and allow to sit for at least 5 minutes before using.

Slice the radish in to thin matchsticks and combine with the dressing. Let it sit at least an hour before serving to enhance the flavor. 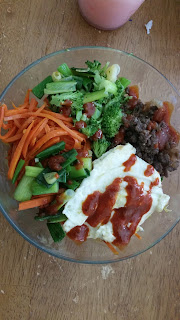 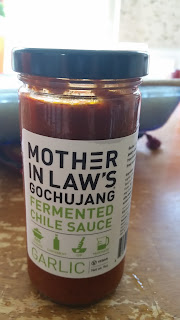 As i've been looking through past posts and updating I have been leaving my old pictures at the bottom so I can see the changes in my cooking and my photography skills.
Labels: Korea