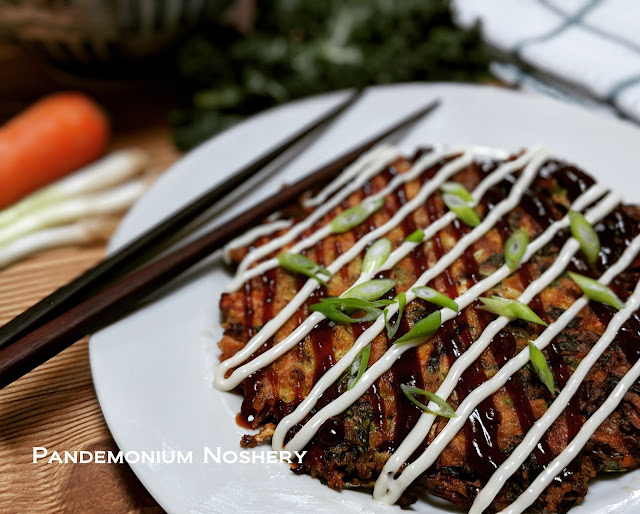 One of the global inspired activities I've been involved in was a travel club for homeschoolers. We met once a month for a new country each time. Each one rotated with the host and they picked the country and the activities and people were invited to bring a dish to share if they wished. The month of Japan, the morning of really, I realized I should bring something but I hadn't been grocery shopping in a while and didn't have much in the way of ingredients around. I did have half a head of cabbage though so I google "Japanese cabbage recipe".  Most recipes I saw at the time were predominantly cabbage, recently though I have seen more and more additions of darker greens and carrots.

I was skeptical about the sauces on top at first. I only like mayo in limited places and only as a background flavor. But since I wanted to try it the way it is supposed to be made at least once before adapting it to my tastes I tried it. I was very pleasantly surprised. The sauces are what makes the dish. They change it from a fried vegetable fritter to something new and interesting. They are also easy enough to make they are good for a quick, fun lunch. Score one for new recipe trying!

Heat the oil in a pan.

In a bowl whisk together the egg, salt, and flour. Add in the vegetables and mix well to combine.

If making large patties place half of the mixture in to the pan and pat in to a circle. Sprinkle bacon or bonita flakes on top and press in to the vegetables.

When the bottom is as brown as you can let it get without charring slide a large spatula underneath and slide on to a plate. use the plate to flip the okonomiyaki back in to the pan and cook on that side as well.

Serve topped with mayo and sauce. 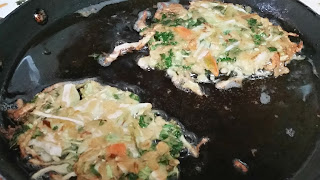 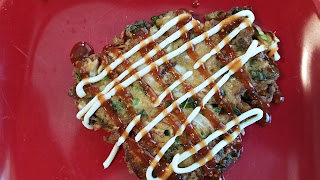