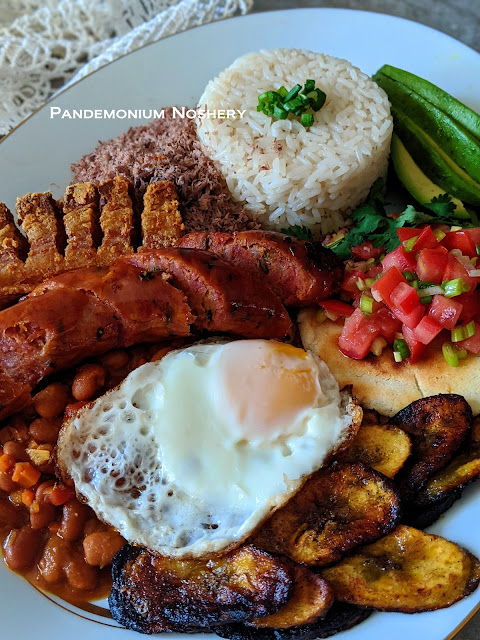 Welcome to the June 2020 episode of Eat the World Recipe Challenge! This month we are dreaming of an afternoon meal in the beautiful South American country of Colombia! I was so excited when this months challenge was announced because I have a good friend from Colombian that has been introducing me to the cuisine. It all started in the math lab on campus where we got stuck together for an entire semester. We were supposed to be studying formulas and, honestly I can't remember what else now, but we both preferred the topic of food. And so we passed the time pretending to study and goofing off. We did both made A's in the class and I learned a lot about Colombian and Peruvian cooking. And a bit about Nepalese cooking from the professor, but that will have to be another post.
So for todays recipe, for this challenge I asked my friend for suggestions. She said Bandeja Paisa is Colombians most iconic dish, that are so many other delicious recipes but this is the one that says "Colombia!" the most. After a few exchanged messages for clarification I learned that this dish is served the day after you have beans and rice and made with the leftovers. It can incorporate all kinds of things, but typically it will have rice, beans, meat fluff, apreas with hogao, pork belly, chorizo sausage, eggs, plantain, and avocado.
Another iconic part of Colombian cooking is the arepa, a favorite and frequent breakfast item in the Pandemonium kitchen. Arepas are a delightful corn cake that can either be fried or toasted. I much prefer the toasted method, especially topped or stuffed with all kinds of delicious things. I also enjoy them as an easy late night snack with feta or tomatoes and avocado. The same corn dough can be seasoned and filled with all kinds of things for delicious Colombian empanadas.
Another popular favorite in Colombian is Aji de Gallina. Aji de Gallina is a creamy chicken dish thickened with bread and seasoned with the delightful golden aji amarillo sauce. Aji amarillo is one of my absolute favorite condiments ever, we always have a jar of it in the fridge and a spare or two in the pantry.
Colombian sausage is different than any other, and annoyingly hard to find if you live in the middle of no where. Which I happen to. Thankfully there is a Colombian restaurant in the nearest big city and I asked them to sell me just four of the sausages to cook at home. They were happy to oblige and I stopped in for lunch while I was there and ate some of the best arroz con pollo I've ever had. Anyway, back to the sausage. I'm not really sure how to describe the taste but it's different than any other chorizo I have every had. It's very smoked, meaty, and distinctly spiced without being spicy or overly seasoned. If you can find some, grab it right away. If not I think an American smoked sausage would be closer in flavor than the chorizo we get in the states.
Another important thing to note is that the plantain in this dish is sweet plantain. Since I knew next to nothing about plantain and don't think I've ever actually cooked with them before I ordered some at the restaurant and realized I actually love them and can't wait to fry them often. I've had them at Brazilian and Puerto Rican restaurants but didn't realize they weren't bananas. I was only familiar with tostones and didn't know plantains were that soft or sweet. So I googled them when I got home and came across a really helpful article titled Plantains 101 that should clear up some things for anyone unfamiliar like I was.
Lastly, hagao is a common Colombian cooking base and condiment. It's made from cooked tomatoes and seasonings. For this plate I did something non-traditional, instead of serving it with a cooked hagao I used all the same flavors and ingredients and instead served it as a fresh tomato salad.
Check out all the wonderful Colombian dishes prepared by fellow Eat the World members and share with #eattheworld. Click here to find out how to join and have fun exploring a country a month in the kitchen with us!
Culinary Adventures with Camilla: Bollos de Mazorca (Steamed Fresh Corn Rolls)
Sneha’s Recipe: Colombian Arroz Atollado
Amy’s Cooking Adventures: Cañón de Cerdo (Colombia-Style Pork Loin Roast)
Making Miracles: Arepas Con Carne Asada
Dinner By Dennis: Pan De Bono (Cassava and Corn Cheese Bread)
Sugarlovespices: Aguacate Relleno (Stuffed Avocado with Smoked Salmon and Egg)
Kitchen Frau: Pan de Yuca (Warm Cheesy Buns) 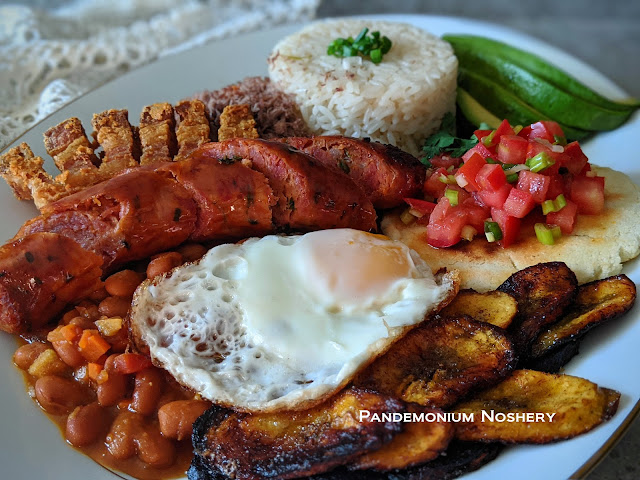 So the list of things on the platter are as follows
Colombian Beans
2 c. dry pinto beans
3 packets sazon azafran
1/2 tsp. adobo seasoning
2 carrots, minced
1 plantain, chopped
1 can petite diced tomatoes
1 onion, chopped
4 garlic cloves, minced
1/4 tsp. cumin
2 Tbsp bacon drippings, lard, or oil
Place the pinto beans and 8 cups of water in a pressure cooked and cook on high for 35 minutes. Quick release.
While that is cooking combine the canned tomatoes, onion, garlic, cumin and preferred fat. Cook, stirring occasionally, for 10 minutes. Set aside.
Once the beans are done check to see how tender they are. If they are still firm cook them an additional 15 minutes, more or less as needed.
If they are tender turn the instant pot to simmer and add the plantain, carrot, and cooked tomatoes. Simmer for 30 minutes or until the beans are thick and the carrots and plantains are cooked.
Carne en Polvo
1 lb flank or or other steak
1 onion
1/2 tsp. onion powder
3 - 4 cloves garlic, minced
1/2 tsp. cumin
8 c. water
1 tsp. salt
Place everything in a large soup pot and bring to a boil. Boil the meat for 2 hour or until tender.
Remove from the pot and allow to cook. Reserve the liquid for soups or discard. Remove any fat from the meat and cut in to chunks.
Place the meat cubes in a food processor and process until it is a fine powder. Taste and season with salt as needed.
Hogao Salad
2 roma tomatoes, diced
2 tsp. olive oil
4 green onions, sliced
1/8 tsp. cumin
1/4 tsp. apple cider vinegar
Salt and pepper to taste
Combine the olive oil, cumin, and vinegar. Toss with the tomatoes and onions. Season with salt and pepper to taste.
Chicharron
1 lb pork belly
1 tsp. baking soda
Water to cover
salt to taste
Cut the pork belly in to strips about a half inch wide. Rub the skin and meat with the baking soda and chill in the fridge for an hour. Rinse the pork belly and cut notches through the meat but not through the skin so it is still connected at the base.
Place the pork in a pot. You want the pot as small as you can without the meat stacking on top of each other. Cover with enough water to cover the pork by two inches.
Simmer the pork for 1 hour or until the meat is tender and the pork renders it's own fat. The pork with then keep cooking, it will fry and crisp up in it's own fat. Make sure the pork cooks on both sides until it is golden and crisp. The frying part took me about 20 minutes.
Remove to a paper lined plate to drain.
Fried Plantains
2 dark or soft sweet plantains
2 Tbsp butter
2 Tbsp oil
1 Tbsp sugar
Heat the butter and oil in a large skillet over medium heat
Slice the plantains thinly and place in the hot oil. Cook over medium until browned on one side, about 3 - 4 minutes. Flip the slices and cook on the other side until browned and crisp. This can be done in batches if not all the plantain fits in the pan without overlapping.
Remove from the pan and sprinkle with a little bit of sugar. Serve warm
Check out previous #Eat the World contributions!