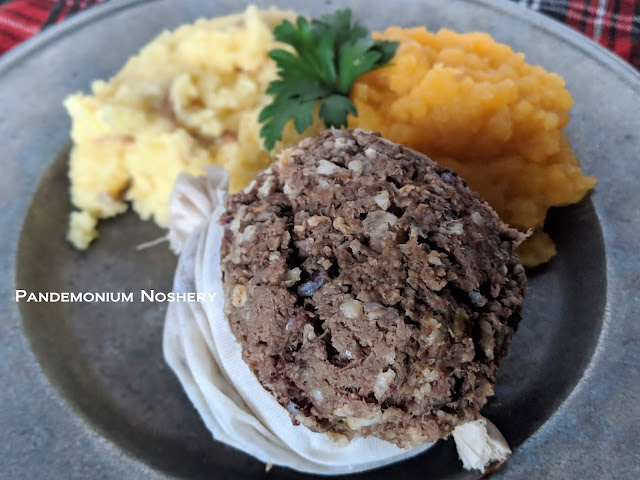 Fair fa' your honest, sonsie face,
Great chieftain o the puddin'-race!
Aboon them a' ye tak your place,
Painch, tripe, or thairm:
Weel are ye worthy o' a grace
As lang's my arm.
(Address to a Haggis - Robert Burns)

January 25th marks the birth of Robert Burns, Scotland's National poet, in Alloway Scotland in 1759. Burn's Night is celebrated every year on his birthday to commemorate his work. In addition to the well know Auld Lang Syne he wrote Address to a Haggis tolling the wonders of the infamous Scottish dish.

Traditional Scottish haggis is comprised of four main parts. The offal, oats, suet, and lamb stomach. And I have to be honest, I love trying all kinds of things, but offal is not one of those things, it is my limit. And so I started looking for mock haggis, simple haggis, and vegetarian haggis and I thought I had a general idea of what I wanted to do and so from there I thought it best to really get to know the real thing and I looked in to that as much as I could as well. While I was looking I also ran across debates about modernizing haggis. Offal isn't as well loved as it used to be and the whole idea of haggis was to use up the less desirable bits because it's what they had on hand. And now, better cuts of meat are ready available and can be considered "what's on hand".

So obviously this isn't the most traditional haggis out there. Rice is not in any way a part of haggis but it doesn't change the flavor at all. I added a little of it for color variation, but only because I had some in the cabinet, I wouldn't have bought some just for this. That is also the reason I added the leftover cooked pot roast, it was something I had on hand.With all the changed we have dubbed this "haggish" instead of haggis, it's haggis-ish.

Add the oats to a dry pan and cook until they are toasted. Remove from the pan and set aside. Add the lard to the pan and heat. Add the onion and cook, stirring, for about 3 minutes. Add the ground lamb and cook, crumbling until it's starting to break up. Season with the salt, pepper, and allspice and keep cooking, breaking it up as much as you can. When the meat is cooked through add the rice, the oats and the beef. Mix well to combine.

Divide the mixture in to four equal portions.

Top one of the squares of cloth with one portion of the meat mixture and form in to a loose ball. Pull the sides of the cloth over the top so they overlap by a quarter inch. You need some overlap so it doesn't come open while cooking but not too much it's hard to get open when you are ready to eat.

Bring a pot with 8 cups of water to a boil with the beef bouillon cube.

Use a twister tie to secure on end of the ball. Push the meat mixture to the secured side so the ball is tight and secure the other side as well. Trim the ends and set aside. Repeat with the remaining three.

Place the haggish in the boiling water and reduce the heat to a simmer. Cook for 1 hour making sure to turn them about halfway through, otherwise the rice on the top doesn't cook properly.

Remove from the boiling liquid and drain. Allow to cook for 10 minutes before opening.

I reduced and thickened the cooking liquid to serve as a gravy and ate with neeps and tatties.