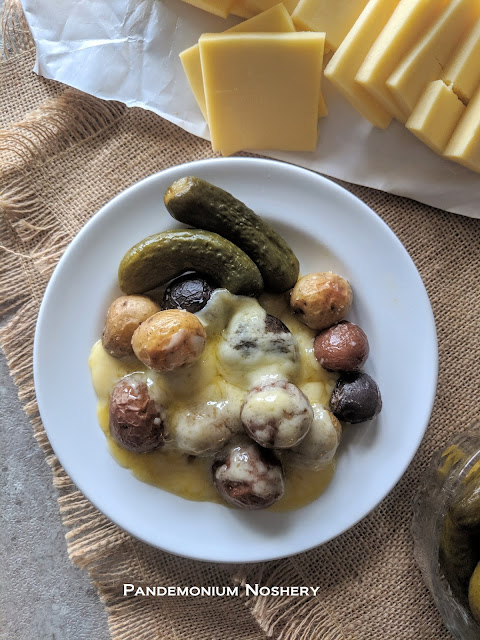 We are going to start 2019 off with cheese week! Which is really an awesome theme to start anything with. So this is raclette, a semi-hard Swiss-made cheese that is primarily used for melted over stuff, potatoes, bread, sausages, and pickles to eat alongside.

Traditionally a large wheel of raclette was held up to a fire and heated until part of it melted. The melted part was scrapped off on to a plate of potatoes and then held up to the fire again to melt the next layer. Now there are tabletop raclette melters or you can do like I did and cook it on the stove.

The only kind I could find locally was a Vermont Raceltte. It was not quite the same as the Swiss raclette we ate in London but still good. 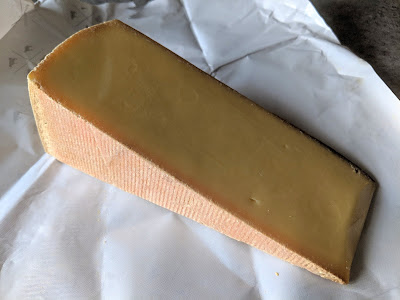 Meanwhile boil a large pot of salted water. Boil the potatoes until they are just under halfway cooked. Remove from the water and place on a large baking pan. Toss with the oil and kosher salt and bake until the potatoes are tender all the way through.

Slice the raclette about 1/8 of an inch thick. Place a small nonstick pan on the stove and heat over medium high. Place as many pieces of cheese as you can in the pan without overlapping. Heat until the cheese is melted, being careful to not let is scorch or stick to the bottom.

Pour the melted cheese over the potatoes, or bread, sausage, etc..