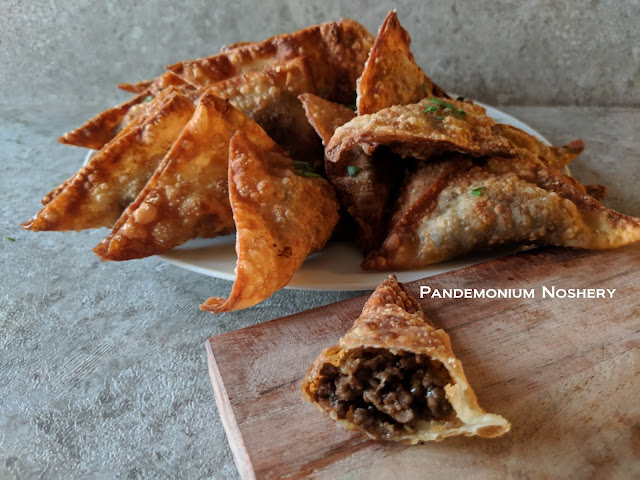 While out one evening with the kids they picked and Egyptian cafe for dinner. I went for my favorite falafel but we decided to try one of the appetizers, the meat sambousek. They also had a cheese and olive version which I will be trying again as soon as the occasion permits.

So my kids are as nerdy about food as I am and they immediately started picking the flavors apart. Most were pretty straigh forward, garlic, onions, cilantro, etc... However there was a tangy sweetness they couldn't place. But as luck would have it, I had bought a bottle of pomegranate molasses for another recipe less than two weeks previous and knew exactly what it was.

Heat the onion and oil over medium heat until translucent. Keep cooking and stirring until golden and caramelized. Add the garlic and cook for about 2 minutes. Add the meat, salt, and black pepper. Cook, crumbling, until about 75% cooked. Add the pine nuts, cilantro, coriander, and sumac and cook until the meat is completely cooked. Drain the fat and add the molasses. Stir to combine.

Meanwhile take one of the wonton wrappers and top with a tablespoon of the meat mixture. Dip your finger in a bowl of water and wet two sides of the wrapper with your wet finger. pull the other side of the wrapper over to create a triangle. Fry in batches until browned on both sides. Remove to a pan and drain. Serve hot.