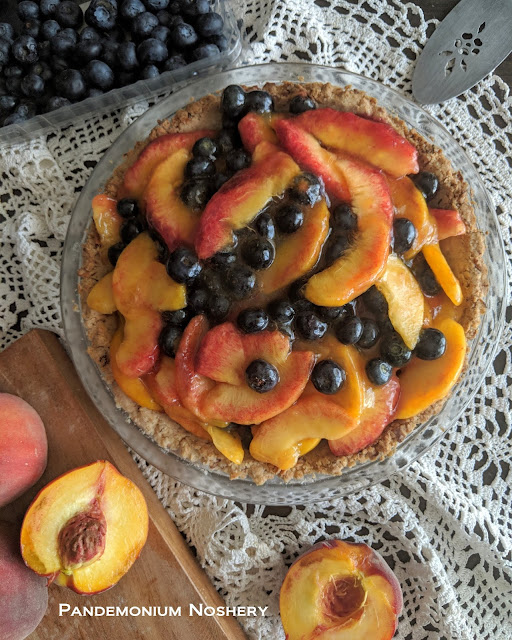 With the 4th of July this week I wanted to share a summer favorite. I used to eat this as a kid in the summer when peaches were ripe. As an adult I moved to Georgia where peaches are a staple, the stae is one of the top four peach producing states in the nation. They are in everything from candy, to baked goods but they also make an appearance in savory dishes like salsa and BBQ sauce. Peaches, a member of the rose family, are originally from China. They were introduced to Europe and then made their way to Georgia in the 1500's. They were first introduced to this country by Franciscan monks on St. Simons Island, a tourist hot spot just off the coast of southern Georgia. Though they were first planted on the coast, now most large scale groves are in the western part of the state.
But did you know that blueberries are also grown in Georgia? They grow so well in Georgia now that they actually surpass peaches and are the most produced fruit in the state. Which makes this delicious pie a perfect treat to represent Georgia. The best part is while the crust is baked, the filling is not. You don't have to heat the oven for long, and you get to enjoy fresh, sweet, peaches in a satisfying pie held together in a bright and lemony glaze. There are quite a few recipes for peach pies with blueberries but I haven't ever seen anyone else make it with fresh fruit before.
Don't just take my word for how awesome this pie is, it's also won more than a few pie contests in it's time. In fact one year at a church baking competition it won with over half the votes! I won a cute ceramic pie dish with cherries panted on it, bragging rights, and a lifetime of people asking me for the recipe for that amazing pie. So here it is, that famous Fresh Blueberry Peach Pie.
One thing to note, there is a discrepancy with the sugar. I listed it as half to a whole cup of sugar. It depends on how sweet your peaches are and how sweet you like things. I tend to use about 3/4 a cup of sugar. Just taste your peaches, if they are on the tangy side add a bit more sugar when you cook the sauce. The crust can be baked the night before and cooled. I like to do this to make prep the next day easier and to keep from heating the oven during the hottest part of the day.

Combine sugar and cornstarch in a medium saucepan. Stir in the water. Bring to a boil over medium heat; stirring constantly, until the sauce is thick and translucent. Remove from heat, and add gelatin, stirring until gelatin dissolves. Cool.

Cover and chill 1 hour or until set. Serve with sweetened whipped cream.