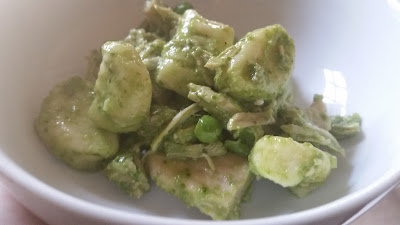 I tried making gnocchi the first time over ten years ago and I can't say it was a success. There is a reason why I haven't tried again before now. They were dense, flavorless and time consuming. I've learned quite a bid about cooking since then, and since I had some ricotta to use up I decided to give them another go.

This is something I find fun, to hand create little things like this as long as there is a process for it. And this was fun once I figured out the method. Before I didn't know to roll them out, cut, and then squish. Nope, I pulled it off piece by piece, rolled them and then pressed them. I hate that way of making things, I hate making meatballs too.

I cooked come chicken thighs earlier in the day and shredded the meat. I seared them and then simmered in just plain water until tender. I shredded the meat and tossed it with the pesto and fridged it until use later that night. I saved the liquid too.

When it's was time to make dinner I simmered the gnocchi in a huge pot of salted water with peas and green beans. They went in first until almost cooked. The gnoochi only takes about 3 minutes. While that was cooking I simmered the liquid down until it was mostly reduced. It doesn't have a ton of flavor, but enough to add just a enough to the dish. Todd the chicken and pesto with the hot liquid in the pan to heat it up. Drain the gnoochi and vegetables, very gently, and combine. Eat with more cheese on top. 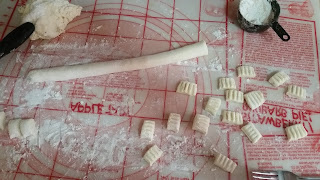 It first I was cutting them and pressing them. I noticed they look a little square and un-gnocchi like that way. So I rotated them on their side and pressed to get the round look 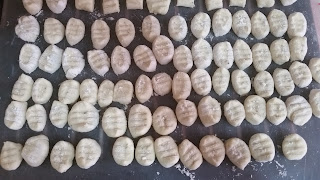