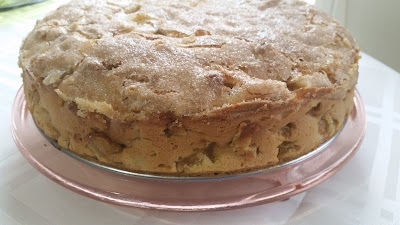 There are few things that annoy me more than fake imitations of things that look cutsie but in reality have nothing to do with the actual thing. For example, it's St. Patricks day and I keep seeing posts of desserts that are lime or mint, and thus Irish because they are green. It seriously gets to me. Not that I hate green for St. Patricks day, my table is set with green and I love it. But I guess what really gets to me, if I have to think about it, is the missed educational opportunity. You have the perfect chance to look in to Irish food, why waste it?
Should I even talk? My menu is pretty cliché. We are having corned beef and cabbage

So I will post about those later as I feel like it but this apple cake, mmmmm

It was also not something that can be pinpointed to any one country. I found it under Irish, French, Russian, Polish, German, Romanian and Armenian. I'd bet, and I'm not going to bother looking it up, that it's something universally eaten in that part of the world. The cake was fairly dense, but not in an undesirable way. I think next time though I will whip the egg whites and fold them in. I did really like the flavor of the apples in this, I used Granny Smith, but the cake doesn't have cinnamon in it. Which pretty much always gets paired with apples. The allspice and nutmeg were good on their own.
Labels: Armenia France Germany Ireland Poland Romania Russia