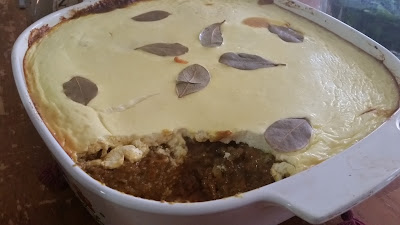 This was a simple dish that caught my eye while looking, but I had no idea how exactly to pronounce it. To be honest, I still have no idea. I tried googling "how to pronounce bobotie" and left as confused as when I started. I found three different pronunciations before I quit. They are as follows with the first two being my top guesses.

Bow-bow-tie
(As in hair bow)

Maybe some day I will find someone from South African and pester them until they tell me.

I sadly couldnt get the top layer to brown like it is supposed to but I think I had too much on there, it's a lot thicker than the picture is. Either way we liked it pretty well. I looked around at a lot of recipe and ended up using one from Pick N Pay. I did notice that a lot of recipes called for sultanas so I added a handful of chopped ones in with it.
Labels: Africa South Africa