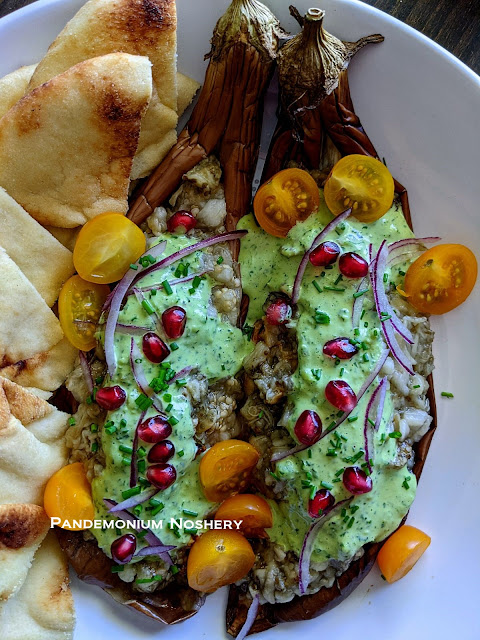 Welcome to this months Eat the World Recipe Challenge, we are doing something a little different, and really fun this month. The current challenge, instead of one country, is a blog swap! I received Evelyne's blog, CulturEatz and was excited to dive in. It didn't take me long to find a recipe I wanted to make, what did take a long time was narrowing down which recipe I wanted to make. In the end, an Israeli recipe was the clear choice for me.
Israeli's are big on salads, called salatim, and they make salads out of everything. As previously discussed, Israeli's cook large meals regularly, and those meals often incorporate a lot of salads that can be enjoyed throughout the week. This salad is a delightful mix of roasted eggplant, fresh ingredients, and a delicious tahini sauce.
I lived in Israeli for a bit. While there a friend and I decided to embark on what we dubbed "Be'er Sheva and the Not Awful Falafel Adventures". We attempted to try every single falafel stand and restaurant in the city. Some were better than others, but none of them were actually awful. One condiment we ran across frequently was amba. Amba is originally from Iraq, and is made from mango, vinegar, turmeric, and fenugreek. We tried it at one of the falafel joints at the bus station and my friend turned to me and said "we are really going to have to embrace our bitter palate". And she was right, amba is delightfully bitter. The tahini sauce with lemon and lots parsley has the same delightful bitterness with a lot of freshness from the herbs. It pairs perfectly with the rich, and slightly smoky, eggplant. It's light, and bright, and vibrant, and best of all it's like a treat that is also healthy.
Some fun facts about Be'er Sheva. First, it's pronounced "bear shave-uh". Bear, as in the fuzzy brown animal you don't wanna run across in the wild. Second, the city is referred to as the "Pearl of the Negev". The lower half of Israeli is mostly desert without any large cities, Be'er Sheva being the only large city around and is the pride and joy of the region. The other large cities in Israel are Jerusalem of course, and Tel Aviv. Then you have the port city of Haifa in the north, and the resort town of Eilat way in the south on the Red Sea. Be'er Sheva is right in the middle making it perfectly situated to be a thriving city that is a mix of the old and new. It is one of the oldest cities, but it's also one of the fastest growing, and becoming a tech center as well as home to Saroka, the largest hospital in the country. To locals the city is abbreviated B7. Why B7 you ask? Sheva means covenant in Hebrew, and is believed to be the site where the ancient prophet Abraham made his oath with Hashem, or God, giving the city it's name. Sheva is also a homophone, and means "seven" in Hebrew. So B7.
The population, like most of Israel, is a mix of ethnicities. The main groups are Jews, Palestinians, and Bedouins. Jewish people that are claiming the right of return and immigrating to Israel, or "making Aliyah" tend to settle quite often in B7. So there is a large Anglo population and getting by with only speaking a teeny bit of the language, is fairly easy.  It's a comfortable city for many reasons, it's a great look at the old while also having all modern amenities. It also is, or was, things are changing, a fairly safe city. Jerusalem is trying harder and harder to be more and more "frum" or religiously observant. Tel Aviv is trying to pull in the opposite direction and is known as a party city. But B7? It's happy to welcome everyone and go about life pleasantly co-existing. It's also waaayyy more affordable than any of the other large cities.
We lived in "Sehuna Alef" or Neighborhood A, meaning it was the oldest neighborhood in the city. We got to be on all the main bus routes, on the border of the "Old City", sort of what we would call downtown. It had all the best shops and markets. But we were also by the large art center, the modern grocery store, and best of all the bus station. We also lived near several really amazing bakeries, but those are like coffee shops in the states and are everywhere. The grocery store cracked me up, it was a popular chain called Shufersal. But the one we lived by was a large one, so it was a Shufersal Deal. The "deal" was written in English and I don't know who they asked to help with it, but "deal" was spelled  E-X-T-R-A. No amount of asking brought any answers, and good luck changing anyone's mind that the sign wasn't pronounced "deal" 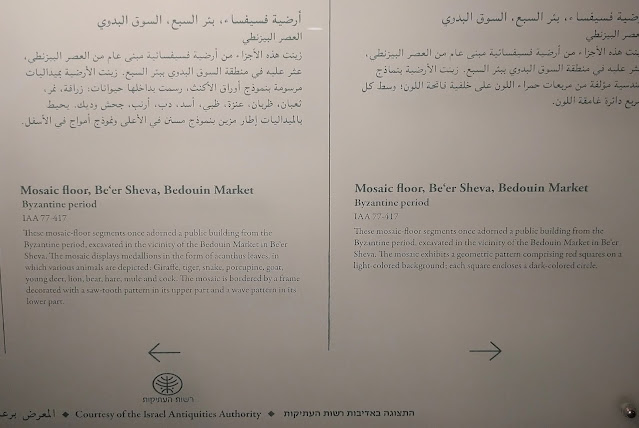 Pictures taken at the BYU Jerusalem Center in East Jerusalem 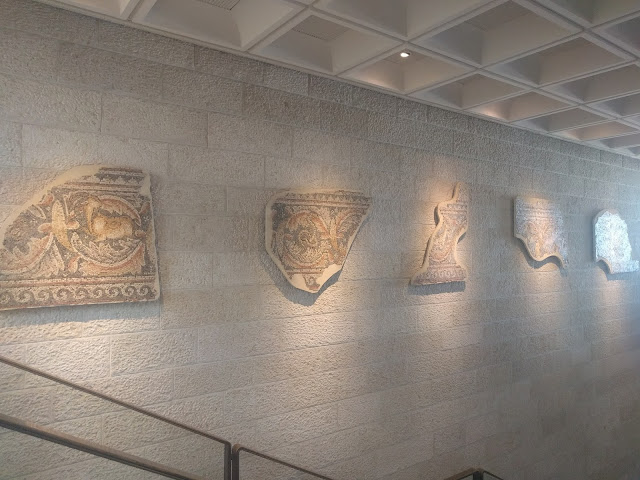 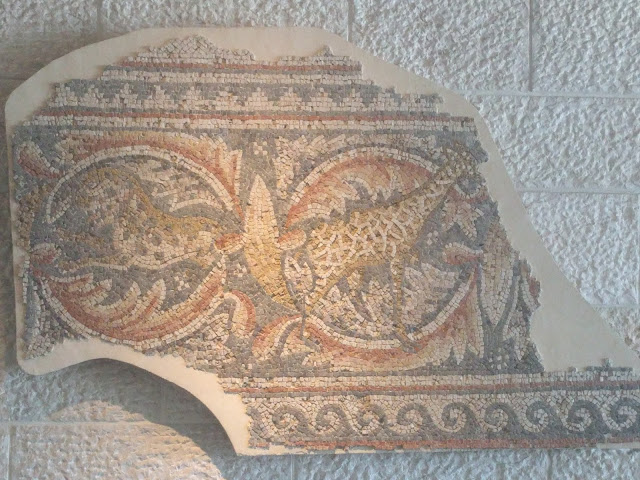 I tried to leave most of the recipe alone. I wanted to do justice to Evelyne's original Burnt Eggplant Salad  post. I did a few small things. I used Japanese eggplants, they are thinner than regular eggplants so they cooked faster, and I was in a hurry. They also produce less liquid so I could skip the draining segment. And then I added a lot more garlic, I regret nothing.
And now the notes on tahini. Always buy your tahini from a middle eastern market, and a busy one if you can. My Wal-Mart and other local grocery store carry tahini but it's usually old. Old tahini is not delicious tahini. It should be bitter, but in a pleasant way that plays off the warm, nutty, toasted sesame, flavor. If it's just bitter, it's rancid. Always make sure and stir before using. Tahini tends to have the oil separate on the top and the bottom gets REALLY thick. So thick that if you forget to stir by the time you get to the bottom it might be solid. If that happens and it's solid you can thin it out with water and still use it to make a sauce with. However, I like to drizzle it with chocolate and then get a new bottle.
Check out all the wonderful recipe exchanges as we celebrate the Holidays. Everybody picked a fellow Eat the World member in secret and was asked to make a recipe from any past ETW posts. Share with #eattheworld. Click here to find out how to join and have fun exploring a country a month in the kitchen with us! 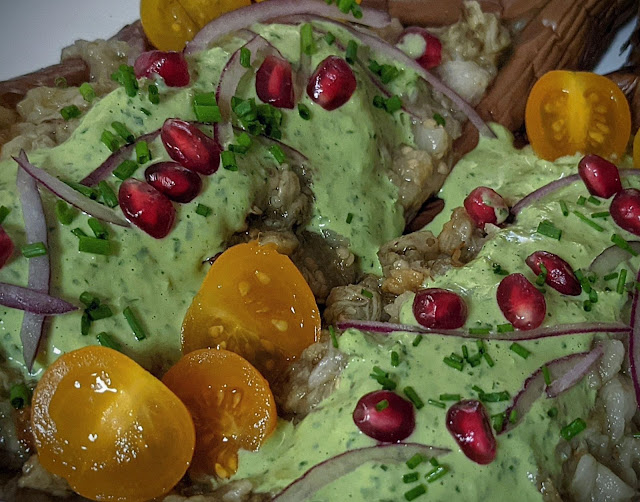 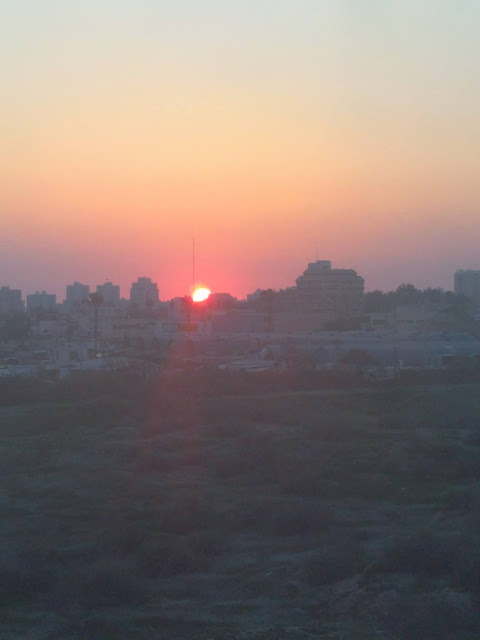