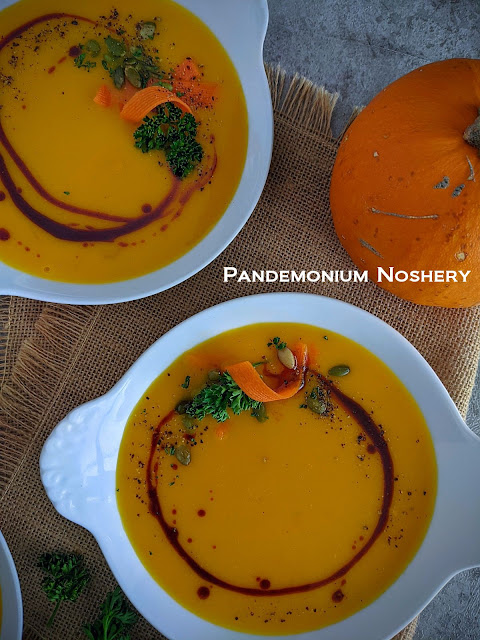 Orange soup is an Israeli tradition. It's popular as a starter for Shabbat and for easy dinners. It's always there but really hard to pin down, to articulate the specifics. A huge part of that is because orange soup is generally pretty ambiguous. It's soup, and it's orange but from there, well, it's really personal preference. I've had so many different versions and beside being an orange vegetable soup that is where the resemblance ended. But that's what makes it so much fun! Add some cinnamon and ginger to make it a fall dish or add some dill for a fresh spring dish. It's great to use up any vegetables you have around and make something delicious with.

Because those customs are such a significant part of religious culture they helped shape life in Israel. Some of the customs are a part of life for even the non-observant. It's similar to how here in the United States we have holidays such as Christmas and Easter that have religious roots but also a large secular component. Israeli culture is entwined with Jewish traditions. The idea of taking Friday to Saturday off, enjoying a great meal, and spending it with a family is still a major part of society. The difference is that for those that do keep the custom for religious reasons there are some rules. One of those is that in addition to a big meal, you can't work at all from sundown to sundown. So that means a lot of soups and salads, and foods that can be prepped in advance. And I have to say, hats off to these women. I cook a large, fancy, meal a few times a year around major holidays. Afterwards I put my feet up, accept congratulations, and don't cook again for a week. They cook an entire feast every single weekend.

Another custom is called kosher. As that applies to food it means no mixing of meat and dairy. They eat them both, but not together. Things that aren't either meat or dairy are called pareve. It is a very particular standard because anything cooked with meat is then not acceptable to be eaten with dairy. So if soup is cooked with meat broth or in a meat pot is then given the status of meat. For this reason a lot of dishes are kept pareve, or neither, and can then be enjoyed with meat or dairy later depending on what you are eating. Pareve stuff as I mention does not contain any meat or dairy products and is cooked or prepared in pots that have never been used to prepare either. For this reason vegetable broth is typically used and no dairy is added to the soup. It can be, broth or cream are acceptable, just not both. Be careful though, pareve and vegan are sometimes used interchangeable but they are not the same thing. Eggs and fish do not fall under meat or dairy and are pareve.

For me, this soup is a great way to use up and elevate some every day ingredients. It makes them more than the sum of their parts. It's also great for odds and ends you might have hanging around the fridge. Maybe not enough to use on their own, but great to throw in to a pot of rich and delicious soup together. I like mine to be fairly thin, not thicker like porridge. If you want it thicker you can double the veggies or reduce the broth. It's soup, it's quite forgiving. 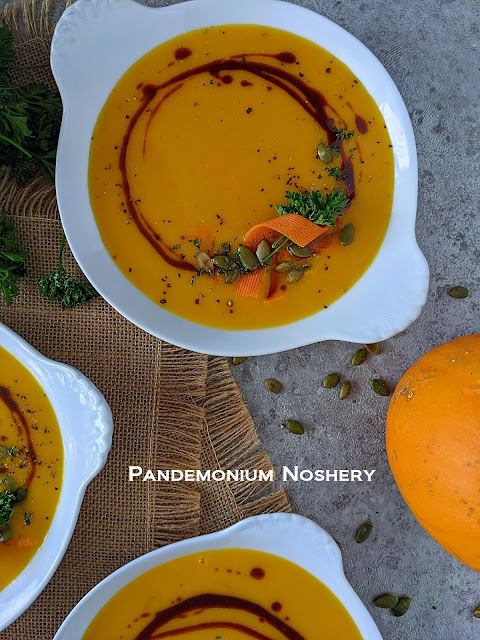 ***********************************************************
Israeli Orange Soup Recipe
1 onion, chopped
2 Tbsp. oil
1 orange bell pepper
1/4 calabaza squash
1 tomato, chopped
1 carrots
1 clove garlic, minced
1 bay leaf
1/8 tsp. white pepper
6 c. vegetable broth
1/2 lemon, zest and juice
Place the bell pepper over a hot burner and leave until blackened. Blacken on all four sides. Place in a plastic bag and leave for at least 5 minutes. Remove from the bag, scrape off the skin, and remove the stem and core. Set aside.
In a large pot heat the oil and add the onion. Cook until the onion is tender. Add the garlic and cook for 30 seconds. Add the vegetable broth and bring to a boil. Add the peeled and roughly chopped squash and carrots along with the tomato, bay leaf and white pepper. Simmer for 30 minutes.
Remove the bay leaf and add the roasted orange pepper and lemon juice and simmer an additional 5 minutes. Pour into a blender along with the cream, and blend on high speed until smooth. Return to the pan with the lemon zest and heat, gently, until heated through. Taste and add salt to taste.
Serve with whatever toppings you enjoy the most. 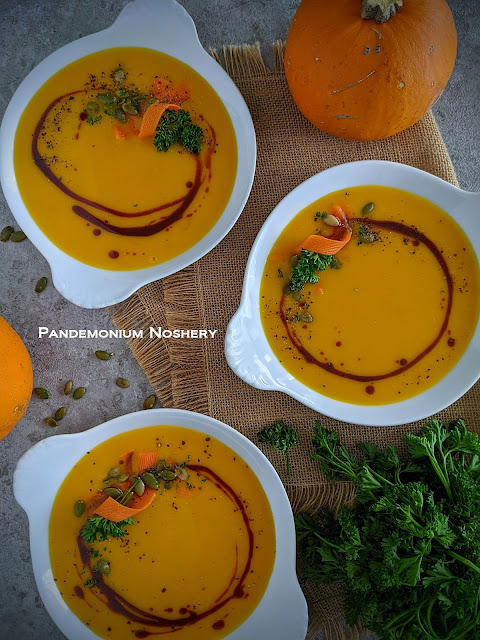