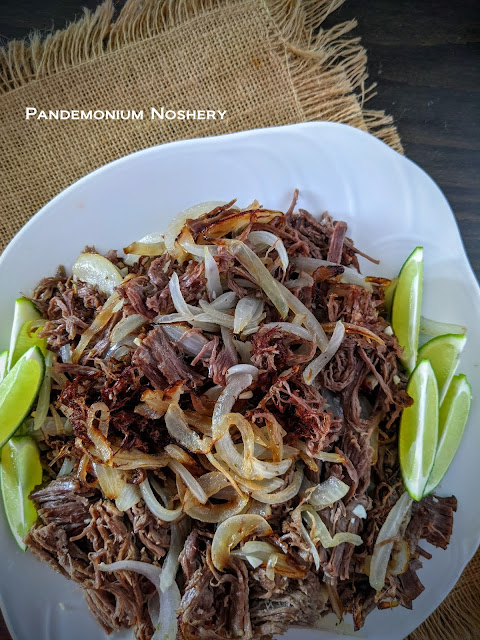 Welcome to this months post on the delicious and simple Cuban dish known as Vaca Frita. I love making this for dinner, I think it's the original meal prep, because of the longer marinate time it's great to make early in the morning, or better yet the night before. Cook the meat, add the lime and garlic, and the leave until it's time to cook dinner. this is great for a nice fall or winter meal, but also never fails to delight in the spring with watermelon. Black beans and rice are traditional accompaniment but I enjoyed mine with radish salad, and french fries.
2 lb. flank steak
2 onions, sliced
2 Tbsp. oil
8 cloves garlic, minced
1 tsp. Adobo seasoning
1 bay leaf
2 c. water
1 tsp. oregano
1/4 c. lime juice
1 whole lime
Cut the flank steak in half lengthwise and cut again twice across the grain. Place in the instant pot with the adobo seasoning, 4 cloves of the garlic, bay leaf, and water. Cook on high pressure for 30 minutes. Allow to natural release and leave to cook until cool enough to handle but not cold.
Combine the remaining 4 cloves of garlic, oregano, and lime juice. Place in a small casserole dish.
Press the top of the meat so that the fibers separate. Don't shred it, just separate it some. Place in the casserole dish and allow to stand for a minute. Flip over so both sides get the lime and the garlic. Place in the fridge for at least 2 hours. I did more like 4 since I prepped it earlier in the day.
Remove the meat from the fridge and set aside. Heat the oil in a large skillet until medium hot. Add the sliced onion and leave it. Leave the onion, without stirring, until it is starting to brown in spots. Stir so they don't burn and allow to stand again. Once the onions start browning again push aside, add another splash of oil, and add the meat. Allow to cook until the meat starts to crisp and then stir again, scraping the bottom as needed, and allow to cook again. Once the bottom starts to brown again remove from the heat.
Place the meat and onions on a platter, scrapping the crispy bits from the bottom as needed, and serve with lime wedges.
Labels: Caribbean Cuba Gluten Free