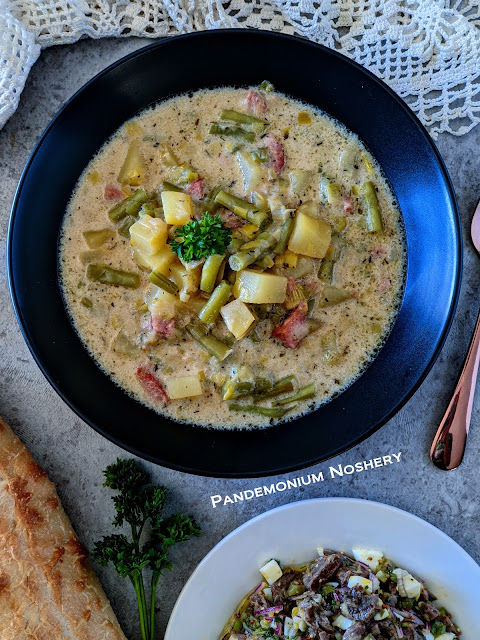 It's that time of the month again! That's right, we are joining Eat the World, and this month we are traveling to the beautiful country of Luxembourg. Luxembourg is surrounded by France, German, and Belgium and their culinary traditions reflect the influence of all three neighbors.
I love a simple soup, especially when it has some new component to experience. This soup was just that, potatoes and green beans paired with soft potatoes in a creamy broth. The mettwurst was the real star here, the sausage was savory, and meaty, and very smoky. Simmer in the broth to cook and then remove and slice. I was able to get real mettwurst as a local German Market but if you can't get ahold of the real thing sub in andouille sausage, it's pretty close.
Check out all the wonderful Luxembourg dishes prepared by fellow Eat the World members and share with #eattheworld. Click here to find out how to join and have fun exploring a country a month in the kitchen with us!
3 leeks
2 Tbsp. butter
1.5 lb. fresh green beans, cut 1-inch long
4 medium red potatoes
3 oz. coarse ground mettwurst
6 c. beef broth
1 bay leaf
1.5 tsp. savory
Salt to taste
1/8 tsp. black pepper
pinch nutmeg
1/2 c. sour cream or creme fraiche
Remove the tough green parts of the leek and cut off the roots. Rinse and clean really well and cut in half length-wise. Slice thin.
Heat the oil in a large soup pot. Add the leeks and cook over medium heat, stirring often, until softened. Add the green beans and cook, stirring, an additional 10 minutes. Add the broth, bay leaf, savory, salt, black pepper, nutmeg, and whole mettwurst. Bring to a boil. Reduce the heat and simmer for 10. Add the potatoes and simmer an additional 20 minutes or until the green beans and potatoes are tender.
Remove the mettwurst and carefully slice or chop. Return it to the pan. Stir the sour cream in a medium sized bowl. Add a spoonful of the hot broth and stir in. Add more broth, a spoonful at a time, until you have added about half a cup of broth. Stir the sour cream mixture in to the soup. Heat through.
Remove from the heat and serve with crusty bread and a salad.
-----------------------------------------------------------------

Check out previous #Eat the World Soups and Stews!