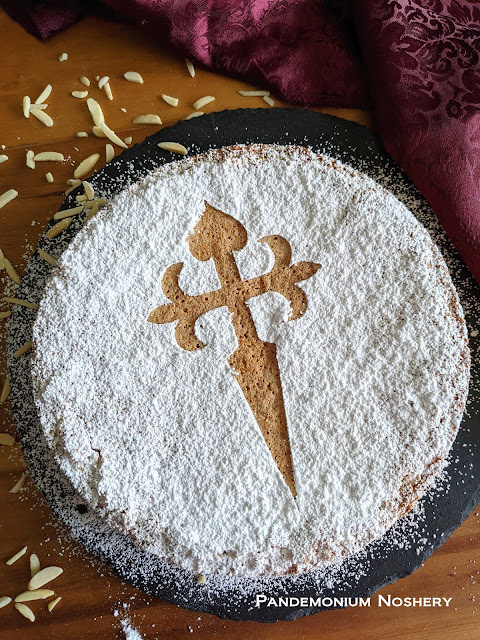 I can't believe it's December and time to share delicious and warming spice recipes and treats. And this warming Spanish cake fits that bill perfectly. The Torta de Santiago gets it's name from the Camino de Santiago, or the Way of St. James, and 300+ mile Pilgrimage through Spain ending at the Cathedral of Santiago de Compostela where the it is believed that St. James, known as Santiago, is buried. The top of the cake is typically adorned with the espada, a combination of cross and sword. Cut your cross out of paper and lay it on top of the cake before dusting heavily with powdered sugar. Or not, it won't look the same but it will be just as tasty.

This tasty cake has got cinnamon, orange and lemon zest, and my own, non-authentic addition, of mahlab. The Mahlab is a middle eastern spice and if you have been around here long you know I add it to most everything. You can find it in most Middle Eastern markets or on Amazon. The combination of fruit and spices is almost reminiscent of fruit cake but in a way that is fresh and not stodgy.

3 eggs
1/2 c. sugar
1 1/2 c. almond meal
1/2 tsp. cinnamon
1 tsp. mahlab (optional)
1/4 tsp. salt
Zest of 1 lemon
Zest of 1 orange
1/4 tsp. vanilla extract
1/8 tsp. almond extract
2 Tbsp. powdered sugar
Pre-heat the oven to 360*F. Take a 9-in springform pan and rub with cold butter. Set aside.
Combine the eggs and the half a cup of sugar. Beat until the egg mixture is large, slightly foamy, and pale yellow in color. Add everything else to the egg mixture except for the powdered sugar. Whisk to combine everything and get out as much air as you can.
Pour in to the prepared pan and place in the oven. Bake for 35 minutes or until it passes the toothpick test. Remove from the oven and allow to cool for 1 hour. Run a knife around the edge of the pan to loosen and remove the outer ring. Slide a frosting spatula under the bottom of the cake to loosten and remove to a plate. Top with the powdered sugar and serve.
Labels: Gluten Free Kosher-Pareve Spain Vegetarian