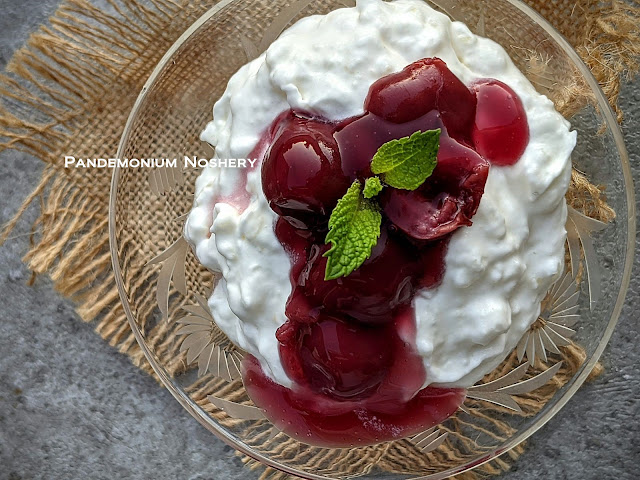 Welcome and "Glaedelig Jul" or "Merry Christmas". Risalamande is a Christmas tradition in Denmark and enjoyed through the whole months of December, and sometimes just on special occasions. This recipe brought to you from Sid's Sea Palm Cooking and is a delectably light and creamy rice pudding, probably my family's favorite rice pudding.

The cooking method on this is really fun. It's made similar to risotto, a long cooking and stirring process, with the liquid being milk. The sweetness from the cooked down milk make a delicious and creamy rice mixture. But then it gets even better by the addition of whipped cream to lighten it up. And it lightens it up beautifully, it's an airy puddling. Then it gets topped with a tangy cherry mixture. I had a bottle of morello, or sour cherries, on hand. I have also seen them occasionally in the freezer section. However if you can't find them, frozen dark cherries work just as well. Just add a splash of lemon juice to the sauce for the tang.

For the rice I cheat. I do the same thing with risotto too. I don't use Arborio rice because I don't keep it around. Short grain rice is necessary, but we prefer sushi rice for dinner so it's what I have on hand. It's also cheaper than most other specialty rice. And as luck would have it, sushi rice is a short grain variety. I haven't noticed a difference and neither has anyone I've served food to. I'm not saying they are exactly the same, and I'm pretty sure the idea would offend all of Italy, but that's what I do.

The whipped cream at the end has my own, minor, addition as well. Pudding mix isn't really a Danish thing to do, not as far as I could tell. I always add it to whipped cream because it acts as a stabilizer. A pinch of that and your cream wont wilt or separate, ever.  I use the white chocolate pudding mix even though I really don't care for white chocolate because in the pudding mix that isn't what you taste at all. It's a very neutral, dairy taste, where vanilla pudding has an artificial flavor and a bit of yellow dye. Either works for stabilization but the white chocolate is the one I prefer. A pinch of xanthan gum works as well, but just a pinch, not the whole teaspoon or you will end up with stringy whipped cream and no one wants that. 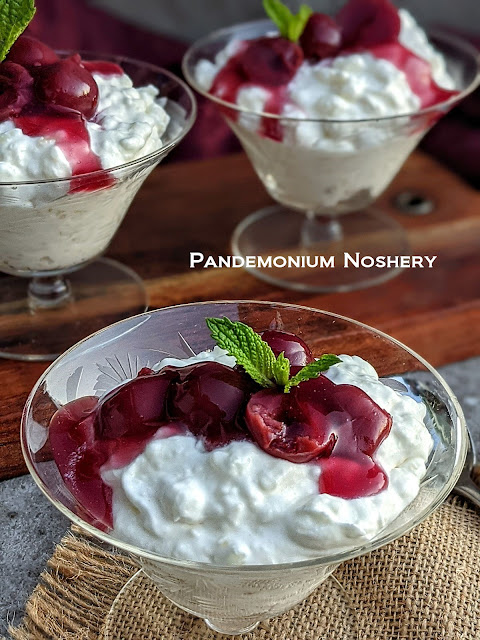 Rice Pudding Recipe
3/4 c. water
3 c. milk, warm
3/4 c. short grain rice
1 tsp. vanilla extract
2 c. heavy cream
1/4 c. sugar
1 tsp. white chocolate pudding mix
1/2 c. slivered almonds, toasted
1 (1 lb. 8 oz.) jar Morello cherries
1 Tbsp. cornstarch
Bring the water to a boil in a medium saucepan. Add the rice, stir, and return to a boil. Boil for 2-3 minutes and then add a half cup of the milk. Cook, stirring constantly, until the milk is starting to absorb and thicken. Add a cup of the milk and continue cooking, and stirring constantly. As with before, once the milk is thickened add another cup of milk. Continue cooking, stirring constantly, until all the milk is in the rice mixture and the rice is cooked through and tender. Remove from the heat and stir in the vanilla. Allow to cool completely, really cool, all the way through.
Remove one cup of the liquid from the cherries and stir in the cornstarch. Cook the cherry mixture over medium heat until transparent and thick. Remove from the heat. Chop 1 cup of the cherries and add to the sauce. Set aside.
Whip the heavy cream with the sugar until soft peaks form. Add the pudding mix and continue beating until stiff peak stage. Remove the chilled rice from the fridge and add a forth of the whipped cream and work it in to the rice mixture. Add another quarter of the whipped cream and fold in, it should be easier at this point. Add the remaining whipped cream and fold it all the in to the rice. Chop the almonds and fold into the rice pudding mixture.
Serve with cherry sauce on top. 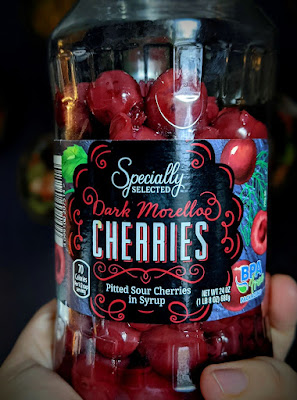 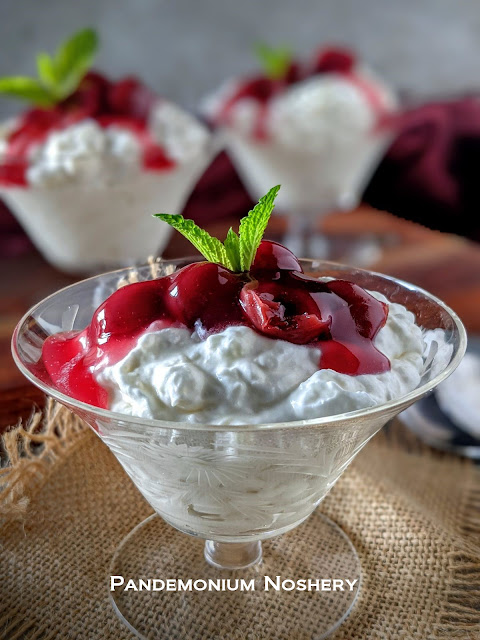