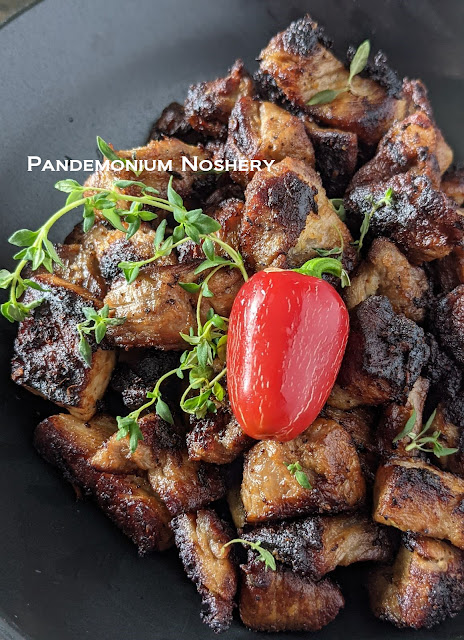 Welcome to this months Eat the World recipe challenge and the end of Guyana week here on Pandemonium Noshery. A few weeks ago the Pandemonium Family had a Guyanese dinner with Garlic Pork, bora beans, plait bread, and some soursop punch to drink. We loved all of the dishes, but this garlic pork from Alicia's Peppepot was my absolute favorite. It might even be in my top 5 favorite things I've ever eaten. It had all the elements I love, pork, caramelization, garlic, perfectly balanced salt, and best of all, lots of vinegar. I don't know if you know this, but I simply love vinegar. I think it add so much to just about everything, especially if it's caramelized. And this is both caramelized AND still retains some tang. It's just perfect.

The traditional recipe calls for pork shoulder, I had wanted to make a smaller batch for a smaller crowd and used my favorite boneless country style pork ribs. The rib meat worked perfectly but after the first bit I really wish I had just gone with the pork shoulder and made twice as much. You won't regret it, it's delicious. Whichever cut you use, you want a fatty cut and the darker meat, it stays more tender once cooked.

The cooking method for this pork was unique. Typically we brown the meat first and make sure to not crowd the pan. When meat cooks liquids are released, if the pan is crowded then the meat stews instead of browns. This method however relies on that. The juice is released which starts cooking the meat and rendering the fat from the pork. The pork them fries and browns in it's own fat lending a deliciously caramelized final product. If you pork isn't overly fatty add a tablespoon or two of lard when cooking to facilitate the caramelization.

Check out all the wonderful Guyanese dishes prepared by fellow Eat the World members and share with #eattheworld. Click here to find out how to join and have fun exploring a country a month in the kitchen with us!

Cut the pork in to 1-inch cubes. Place the vinegar and garlic paste in to a gallon sized zipper bag and mix to combine. Add 3 of the thyme sprigs. Add the pork, and thyme, in layers. add the brown sugar and salt and squish a bit to combine.

Squeeze the air out of the bag making sure the pork is covered with vinegar. Place in the fridge and leave for 48 hours. When it is done the pork should be white.

Heat a large skillet. Drain the pork and remove the thyme. Add all of the pork to the heat pan and cover with a lid that is slightly smaller than the pan. You want to keep some of the steam in but not all of it. Once some of the liquid is released add the lard and continue cooking over medium heat until the liquid is gone and the pork starts sizzling. Keep cooking until browned and caramelized all over.

Remove from the pan and serve immediately.