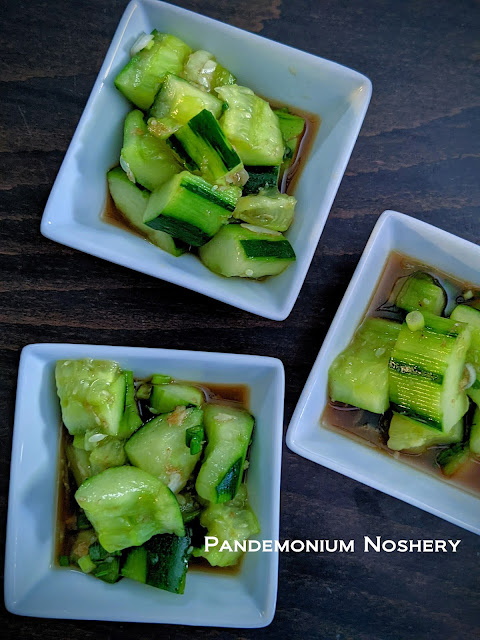 If you have been here much you know I absolutely love cucumbers. They are one of my favorite things. This delicious Chinese salad is simple and full of flavor and I love the way smashing the cucumbers changes the texture just slightly.
1 English Cucumber
1 clove garlic, smashed
1 green onion, sliced
1 Tbsp. rice vinegar
1 Tbsp. Soy Sauce
1/2 tsp. sugar
1/4 tsp. sesame oil
1/2 tsp. salt
Slightly peel the cucumber; it doesn't need to be all the way peeled but you don't want large sections of peel remaining. The peel keeps the cucumber from smashing properly. Take the flat side of a large knife and place it on the cucumber. Smash down as much as you can the entire length of the cucumber. I found that it didn't smash much the first time. Rotate the cucumber and smash again. Slice the cucumber at half inch intervals and add the smashed chunks to a bowl, breaking up further as needed.
Season the cucumber pieces with salt and allow to stand for 10-15 minutes. Drain the liquid from the bottom of the bowl and add the remaining ingredients. Serve.
Labels: China Gluten Free Vegan Vegetarian