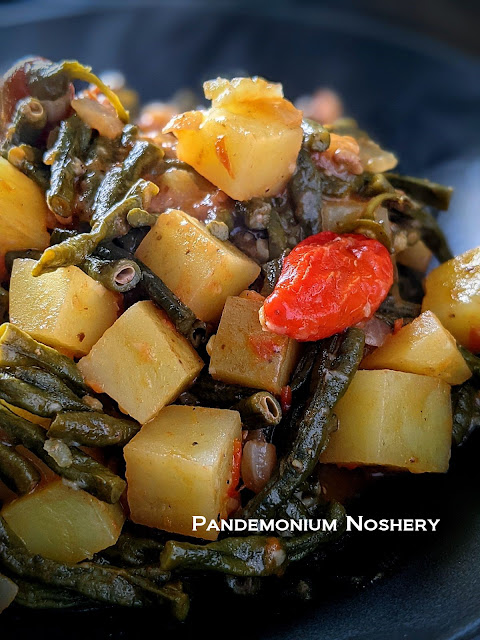 Welcome to this weeks Guyana week! This is something I haven't done in a long time, a week long serious focusing on a one country, in this case the beautiful South American country of Guyana. Guyana is a small country on the north eastern side of the continent and shares borders with Venezuela to the west, Suriname to the east, and Brazil to the south and west.

It was interesting to learn that Guyana is the only country in South America with English as the national language, a byproduct of English colonization. They have been independent since 1966, and while the national language hasn't change, most Guyanese people have Guyanese Creole as their primary language.

This recipe is from Alicia's Pepperpot. She said that bora beans, also known as snake beans, yardlong beans, and Chinese long beans, are common in Guyana. This way of prepping this is a common dish, and make it to see for yourself, but since I have already I can see why. They are delicious and simple. If you can't find bora beans, use fresh green beans in their place. They aren't exactly the same, but they are quite similar. The bora beans had a delicious earthy flavor, and they do take a bit longer to cook.

1 lb. bora beans
1 onion, chopped
1 tsp. garlic paste
1 scotch bonnet pepper
2 roma tomatoes, chopped
1 small potatoes, chopped
1 1/4 c. water
1 bouillon cube (chicken or vegetable)
dash black pepper
2 Tbsp. vegetable oil
Sliced, cooked, chicken or pork (optional)
Rinse the beans and then cut into 1 inch slices.
Heat the oil in a large skillet. Add the onion and pepper and cook, stirring, until the onion is almost tender. Add the garlic and cook for 30 seconds or just until fragrant. Add the chopped tomatoes and cook until they are broken down.
Add the bora beans to the pan and continue to cook and stir for 6-7 minutes. Add the water, bouillon cube, and black pepper and simmer for 25 minutes.
Add the potatoes and then simmer an additional 15-20 minutes or until the potatoes are tender. Once the potatoes are cooked add the chicken or pork and heat through.
Labels: Central/ South American Gluten Free Guyana Vegan Vegetarian