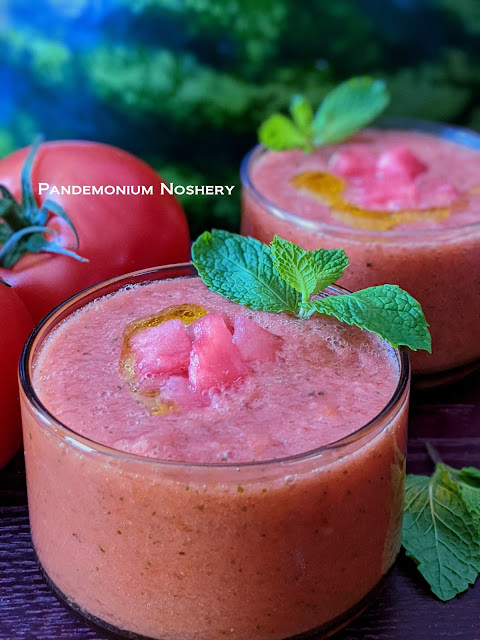 Gazpacho is a tradition in Spain with obscure origins, thought to have originally been a dish of stale bread, olive oil, garlic, and liquid pounded in to a soup. The introduction of tomatoes brought about the iconic cold soup that is the most well known today. Cherries are also a traditional addition in late summer, a recipe I will be sharing later this month as well. Other fruits are starting to catch on in Spain and be introduced in to Gazpacho as well as the traditional flavors. According to Spanish Sabores, where I adapted the recipe from, it is gaining popularity in Spanish restaurants as a delicious and refreshing summer treat.

Not only is it delicious, it's perfect for this months Improv Cooking Challenge, Watermelon and Olive oil. Seriously, I didn't think I was going to be able to join this month, I was having such a hard time finding an international recipe that used them both, but I am so glad that I did.

Some of my notes for making this recipe. Some recipes call for blanching the tomatoes, which I think takes up too much time and uses too many dishes for what is essentially a savory smoothie or for pulverizing everything and straining, which I also don't have the patience for. So I remove the seeds and call it good. You can be as proactive as you wish. For the red onions, I had just pickled a jar of onions, and use the last red onion, so I grabbed a handful of those and used that. They had only been in their pickling liquid for about an hour so they weren't overly flavored yet. And the last tip, for the vinegar Sherry vinegar is traditional, and delicious, but I seem to have run out over the winter since I use it mostly in gazpacho which I don't eat as much in the winter. So I used part while vinegar and then switched to my German 13 herb vinegar so a little more flavor. It was an amazing combo
Improv Cooking Challenge; July 2020
Watermelon and Olive Oil

Cut the tomatoes in half. Remove the seeds from the insides and squeeze slightly to remove any excess. Cut out the top where the stem connects and place in the blender.

Add the watermelon to the blender with the tomatoes and add the garlic, red onion, and vinegar. Blend until it is smooth. Add the mint and olive oil and continue blending until the mint is finely ground in to the soup.

Taste and add salt and adjust the vinegar as needed.