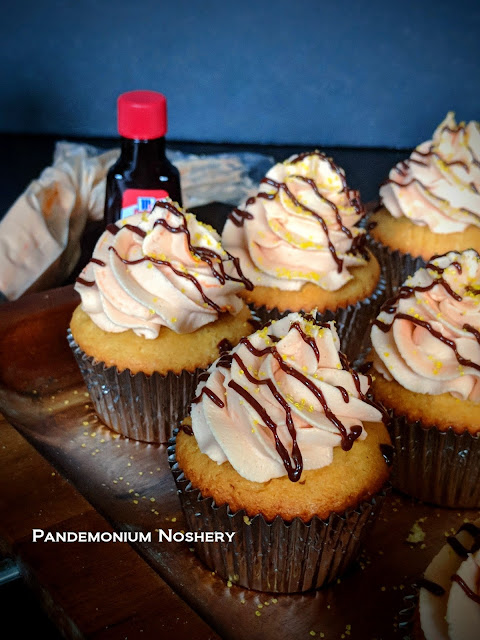 I don't usually love when foods have names, it seems strange to me. But this one has a story, I call it 'The Girlfriend" because it reminds me of a good friend. My friend told me about a store I had passed for almost a year and never really though much of, insisting I needed to go in and would love the place. Fast forward a few years and she and I were in Savannah having fun, and no girls trip was complete without a trip to The Store. While there I grabbed some funky looking chocolate bars, a Bissinger peanut butter maple one and a caramel banana one.We ate them on the way home and decided they were the most optimal eaten together.

This cupcake is a delicious mix of both. A peanut butter cake filled with banana white chocolate ganache, topped with a reddish maple swiss buttercream, and drizzled with caramel and chocolate. You don't HAVE to give the frosting  red color, but it's not The Girlfriend" without it, my friend is a redhead. Do not assemble until right before you are serving them, the banana flavor takes over pretty quickly and you wont get the peanut butter or maple flavors if you do.

While I don't normally turn to cake mixed, for this particular one it's a requirement.  Without it the cake is incredibly dense, I haven't perfected the fluffy peanut butter cake on it's own yet. And that fluffy texture is delicious with the fluffy swiss buttercream and ganache.

Combine the mix, eggs, melted butter, and buttermilk until smooth. Mix in peanut butter. Fill lined cupcake pan and bake until the tops are just cooked, about 20 - 25 minutes. Allow to cool completely.

In a high powered blender puree the banana and cream jut until smooth, do not over mix or the cream will whip. Add the white chocolate and cook over medium heat, stirring constantly, until smooth. Remove from heat and chill over night.

Place a shallow pan of water on the stove. In a heatproof bowl combine the egg whites and sugar and cook over medium. Keep heating, and beating constantly by hand, until the sugar is dissolved. Remove the pan from the water and dry the bottom.

Pour the mixture in to a mixing bowl and beat until it doubles in size and is opaque. Beat in the butter, one tablespoon at a time. It will look like it is curdling but keep beating, It will eventually come together and be a silky smooth frosting. Add in the extracts with a pinch of salt and beat to combine.
Add the pecans and oats to a dry pan and cook, stirring, until toasted. Remove from the pan and chop fine or add to a food processor until coarse crumbs.

To assemble use a melon baller or a knife to remove a small scoop of the cupcake. Fill with the ganache and then pipe frosting on top. Drizzle the top with caramel and chocolate and sprinkle with the toasted pecans and oats.