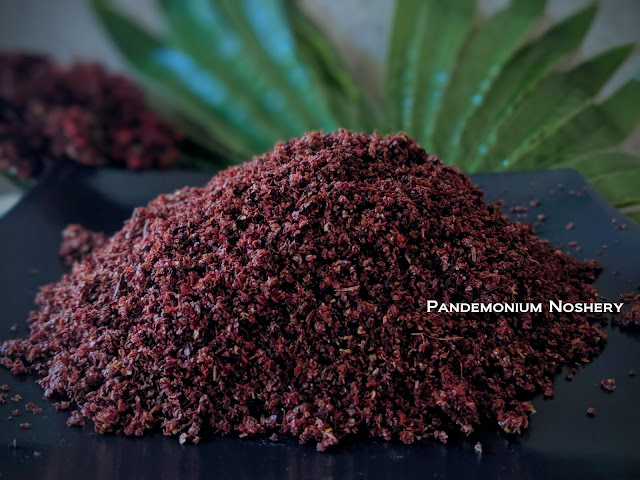 Sumac is a bright red spice extremely popular in middle eastern cooking. It's astringent without being acidic so it lends that fresh tartness without making it overly sour which means you wont need sweetener to balance it out. It's wonderful, and typically I buy it on Amazon from Spicy World. When I saw that it grew in abundance locally I decided I wanted to try foraging my own. So I went to my foraging guru, friend, and fellow blogger, Penny Price of Penniless Parenting for her tutorial on foraging your own. 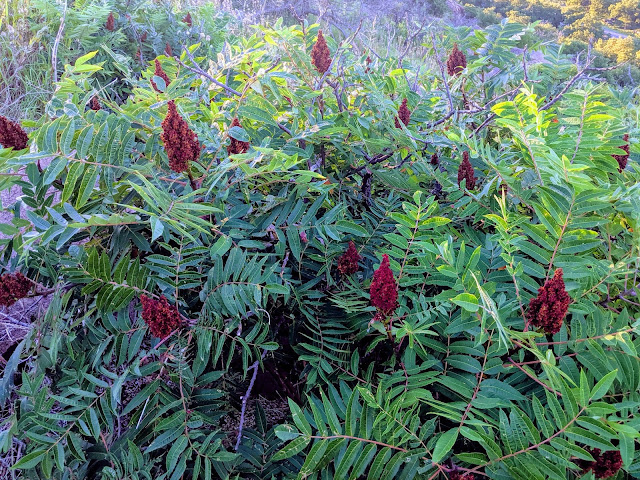 Most people are familiar with sumac via the poisonous variety, but they are not the same thing. Referring again to the expert, Penny says:


"The common trait that the edible sumac plants have that distinguishes
them from poison sumac is this- edible sumac has reddish, brownish,
or purplish berries which are edible. Poison sumac's berries are white.
I bolded that and will repeat that point to make it clear- red sumac
is edible, white sumac is poison. With that difference in mind, let us proceed." 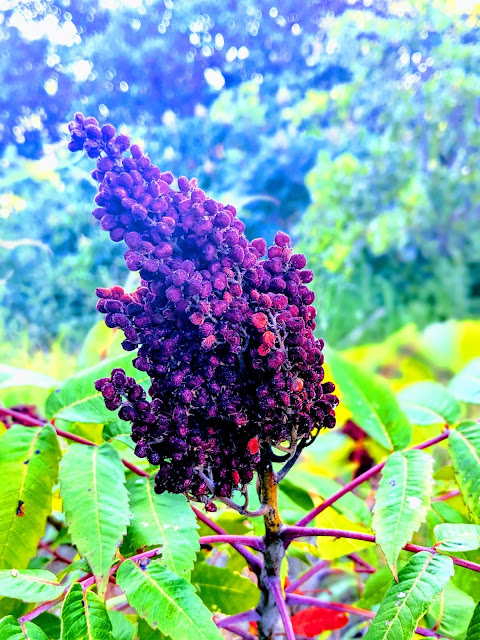 This variety, know as smooth sumac, is what grows in the midwestern US. Staghorn sumac is also common and looks similar but the berries are fuzzy. Both varieties, actually all red sumac berries, called dupes, are edible.

So once you have your sumac either from Amazon or your backyard you are going to need to know what to do with it. And that can range from the traditional to the not so traditional, seriously, who would have thought to put it with apple cake?? So I asked

Fattoush - Cilantro & Citronella
Fattoush is a middle eastern chopped salad full of all kinds of fresh and delicious chopped cucumbers, tomatoes, and pita bread in an olive oil and sumac dressing

Ottolenghi's Roast Chicken with Za'atar and Sumac - Panning the Globe
Chicken thighs are spiced with za’atar and sumac, tossed with onions, lemons and garlic, and roasted.

Lamb Kofta with Roasted Squash and Israeli Couscous - Krumpli
These lamb kofta are meatballs in all but name but are loaded with dried mint, chili and pine nuts. Served with squash roasted in pomegranate molasses and zaatar and rounded out with Israeli couscous.

Man'oushe - Lins Food
Lebanese street food, a popular breakfast that is eaten on the go, crispy on the outside, slightly chewy on the inside, and topped with the most aromatic of spice blends – za’atar. 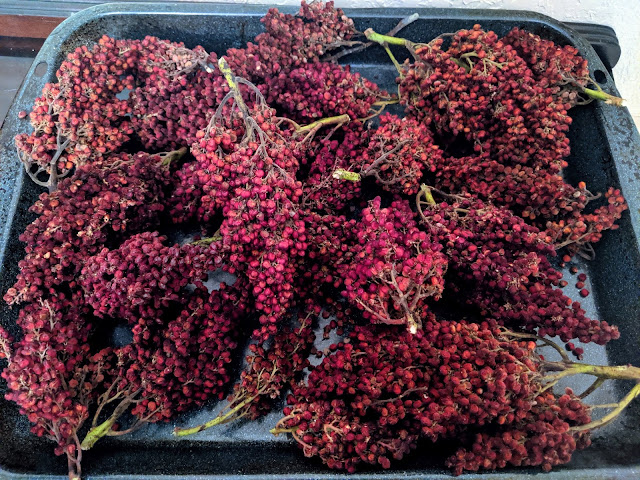 Now on to how to forage your own!

1. Collect your sumac dupes. Make sure that the area you collect from is not right on a main road there they are exposed to exhaust constantly.

2. Take your dupes and separate the branches from each other to allow for airflow so they dry evenly. Allow the berries to air dry for 2 weeks, turning every few days.

4. Sift the mixture through a wire strainer to separate the crushed hulls from the hard centers. Use your hand to move it around some to make sure you get all of the sumac.

5. Place in an airtight container and use on any of the above recipes or any place sumac is called for.
Labels: Israel/ Jewish Jordan Lebanon Middle Eastern Palestinian Spice Mixes and Condiments Syria United States Vegan Vegetarian