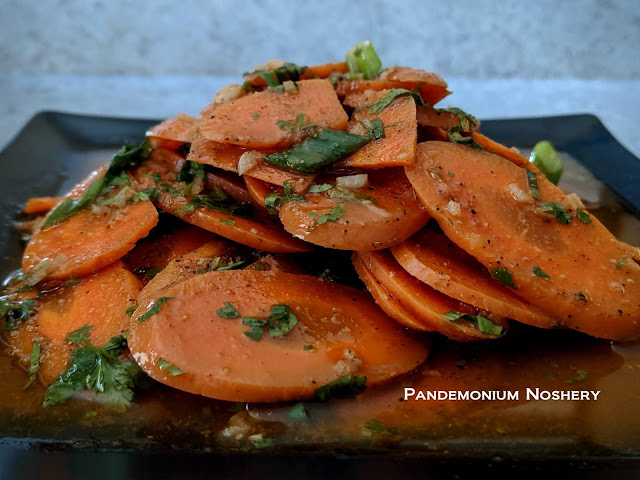 This salad is a Moroccan staple that is enjoyed throughout the region and beyond. It's also incredibly popular in Israel, a nation in love with salads of all kinds.

My family absolutely LOVED Moroccan night. More so than even I was expecting, which is saying something, I've turned them all in to foodies. For the olive oil I found a Tunisian pepper infused olive oil, called baklouti. It was already a little spicy and had a great flavor. Olive oil is also great here, just add the harissa in the dressing for more of a kick.

Slice the carrots fairly thinly on the bias. When the vinegar water is boiling add the carrot and give it a stir. Boil for 4-5 minutes, until the carrots are just starting to cook. You want them to be ever so slightly cooked, but still firm.

Combine everything else, except the cilantro, in a bowl and allow to sit.

Drain the carrots and immediately toss with the dressing while still warm. Place in the fridge for 30 minutes until no longer hot. Toss with the fresh cilantro and  and chill for at least an hour.

These are better if they sit overnight and have a chance to mingle, reserve the cilantro until just before serving.