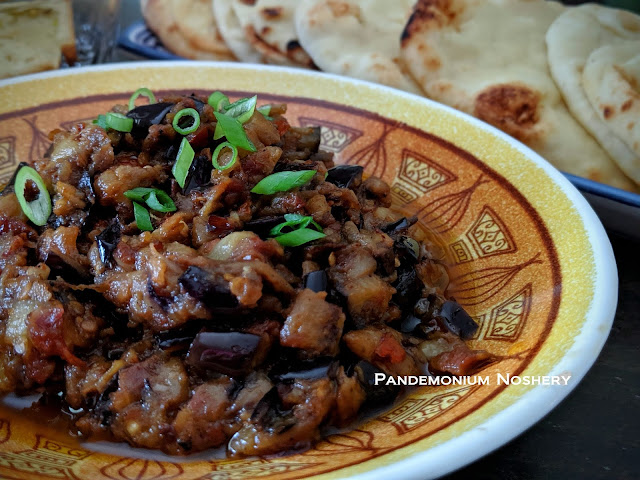 One of the delicious things we ate at the Moroccan restaurant that sparked this series was zaalouk. When I ordered it I wasn't sure what to expect having never heard of it before. I was imagining something similar to babaganoush and was pleasantly surprised when it was something totally different. Not because I don't love babganoush, I really do, but I love eggplant dips with flat bread and this was amazing.

Adapted from 196 Flavors, and it tasted almost identical to the restaurant version, only slightly better. For the olive oil I used the Tunisian baklouti olive oil I mentioned previously. It has a little bit of it's own kick but red pepper flakes work as well.

Heat the olive oil in a large skillet and add the tomatoes. Cook, stirring occasionally, for about 5 minutes. You want to break the tomatoes down. Once they are starting to cook, turn the heat to high and leave them until the are starting to brown on the bottom. Leave them as long as you can without letting them go black and bitter.

Immediately stir in the eggplant cubes and the garlic and cook, stirring, until the eggplant is well coated.  Add the paprika, cumin, chili, red pepper, salt, and black pepper and stir to coat.

Keep cooking and stirring for about 15 - 20 minutes or until the eggplant is thoroughly cooked and starting to break down.

Remove from the heat and mash slightly with a potato masher.

Push the mixture to one side of the pan and prop it up to allow the excess oil to drain away from the eggplant. Scoop the slightly drained eggplant in to a serving bowl. Some oil will remain and show around the edges but thats ok, you want some in there.