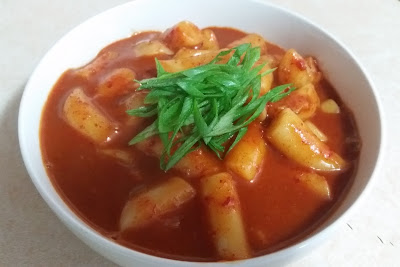 Remember the exploding rice cakes from last night? I think since they weren't the fresh ones they were supposed to be soaked before using. Well now I have a package that needs to be used up. So today for lunch I am making a recipe I have drooled over for a while now and never made. And part of that was due to not being able to eat some of the main ingredients, the ones used to make the base stock. But I really wanted to try them, so I'm making a version that while it won't be exactly the same, hopefully it will be close. And most importantly, tasty.

My kids aren't keen on spicy so I only made a small batch, just enough for me to eat.

I used Maangchi's recipe but I cut everything in half. For the broth in place of the anchovy and the kelp I used pork bouillon and doenjang. Next time I think I will try it with the mushroom broth that she reccomends, but for now, this was amazing. I loved the texture of the cooked cakes, they were like something between melted cheese and a firm gummy candy. But soft and squishy but firm too.
Labels: Korea