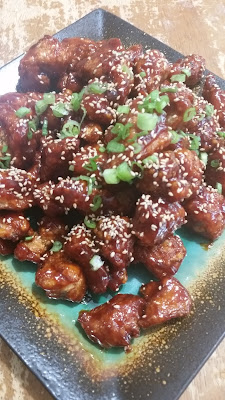 So I had a really fun experience making this for dinner. I used a combination of two recipes, one that I had seen on pinterest, and then of course I checked Maangchi to see what she did. The first recipe I saw was from "My Korean Kitchen" and included rice cakes. Since I have been interested in the for a while I stopped by my favorite Korean grocery store and grabbed some. I did the double frying of the chicken to get it extra crunchy and then added the rice cake to the pan. It said to fry it for a minute or two until the outside was crisp, about a minute. I was watching it but it wasn't doing anything, I turned by back on them for no more than 2 seconds when, BOOM, and I saw something go flying. Yeah, it exploded. So I didn't add any of them to my chicken and I will save the rice cake for another recipe, hopefully tomorrow. Here I am only going to post my sauce recipe and not the entire recipe since it's just fried chicken and directions are in both of the recipe I link.

Mix the ginger and lemon to form a paste and let it sit for 5 minutes. Whisk the remaining ingredients and then combine 3 - 4 pounds of chicken breast meat cut in to cubes. Let sit for a few hours in the fridge to marinate. I just tossed with cornstarch before double frying.

For the sauce I noticed that Maangchi had a really simple recipe with few ingredients while the other had more so I sort of did what I wanted and loved how it came out.

Sauce to toss with after it's cooked. Not too much or it will get soggy, just enough to make it sticky. I did use all that I made though. It was just the right amount.

I mixed mine earlier in the day and let it sit in the fridge. I have no idea if that changes the flavor at all but it helped with having less to do at dinner time. While I was frying the chicken I just cooked the sauce in another pot on the stove.