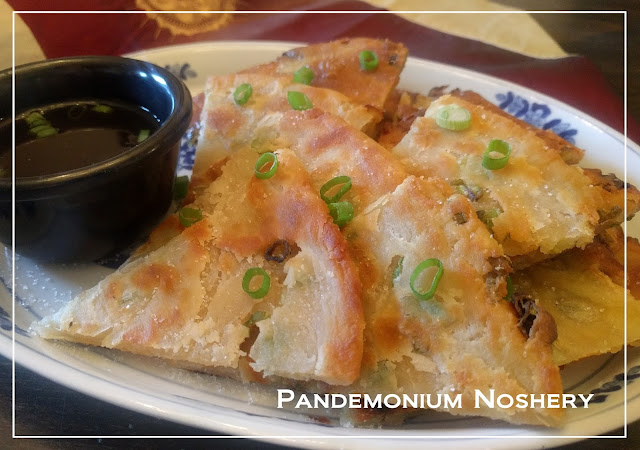 With Chinese New year approaching I have been planning an activity with the local homeschool group. This year will be a bigger event so in some ways I can do more but in others I am more limited. Last year it was at my house with friends so I was able to make scallion pancakes. They required a few steps and were a little involved, but they weren't hard at all. 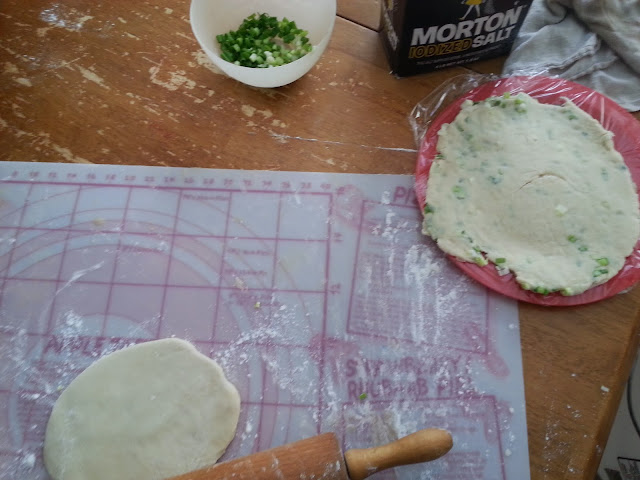 I love the flakiness. This was the first time I had worked with a laminate dough but it was a fairly easy process. I changed the ingredients a little, instead of brushing the dough with the sesame oil I combined equal portions of sesame oil and butter. The flaky, buttery, crunchy, salty, oniony flavors worked beautifully together. It is a delicious treat I can't wait to make and pair with other foods. Essentially a savory pastry, it worked well with vegetable soup a few days later. I would imagine they go with lots of things.

The green onions puncture the dough hen rolling out, I have found it works better when they are really thin.

In a food processor add the flour and turn it on, slowly pour in the oiling water and run just until combined. Take the lump out and knead it slightly until it is smooth. Break the dough in to four lumps and put in a plastic bag. If you are making them right away leave out at room temp for 30 minutes. Otherwise refrigerate overnight. This is how I usually do it because I like prep work.

Take one of the dough pieces and roll it out really thin. Lightly spread with a mix of sesame oil and butter. Roll the dough in to a log, taking care to not create air bubbles. Take that the roll and roll it again lengthwise like a cinnamon roll. Pat the dough flat, squishing and pushing as flat as you can and then roll out again.

Brush the dough with the butter and sesame mixture again and sprinkle with 1 green onion, sliced. Roll again, tightly and then roll like a cinnamon roll and then roll out until it is flat.

Heat 1/4 inch of oil in a large pan or skillet. Slide the pancake in to the hot oil. Lift the sides to make sure air isn't trapped beneath it, those parts don't cook as well.

Cook on each side about 2 - 3 minutes, until golden brown. Remove from pan to a wire rack and sprinkle with salt. Combine all the sauce ingredients.

Cut the pancake in to 6 or 8 depending on the size and serve immediately. 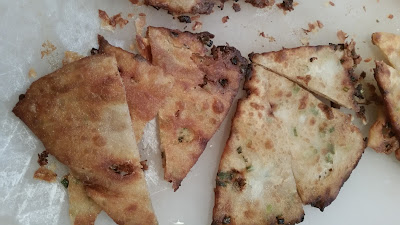