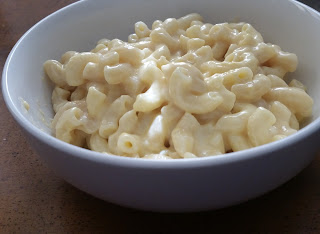 Long before the internet the world still shared ideas. The process might have been slower, but it was still there. The Greek and Roman gods are the most memorable instance of this but in no ways the only one. Food is of course something else that was shared, people have always loved food and finding ways to make it more interesting is nothing new either. This also makes it hard to trace the origins of specific dishes. Or when it is traced, it's yet made harder still by the popularity it find in a country that makes it one of their icons.
Take pasta for example. When we think "pasta" the country that comes to mind is Italy for most people. And it is an icon of Italian cuisine, but it actually probably originates from China/Asia. We can thank travelers for bringing the idea back and really running with it.
So with that min mind, nothing is really more American than macaroni and cheese. Thomas Jefferson is typically credited with the dish but that's not entirely accurate. It was a common thing in parts of Europe while he was there, and in fact already here in this country as well. But he loved it so much that he served it often, and because noted for it, and that helped with it's popularity and having it attached to his name.

I love macaroni if it's well made, but it so rarely is. Typically the sauce is thick and gloppy, or poor quality cheese it use, or just one type of cheese, it's too dry, or the worst of them all, powdered cheese is used. I'm just going to ignore that last one and pretend it doesn't exist. It shouldn't. But as to the others I found a simple, fool-proof, way of making perfect macaroni and cheese every time.

Start by boiling elbow noodles in salted water. When it comes out mix it with heavy cream, grated cheese, and some salt. Bake at 350*, stirring every 10 minutes until the cheese and cream form a sauce. Remove from the over and let stand for 5 minutes before enjoying. I won't make it any other way ever again.

And a couple notes, it has to be heavy cream or it won't work. Do NOT, I repeat, do NOT, try and reduce the fat content. The fat is what makes it work. Grate your own cheese, the bagged stuff has a coating that makes it taste funny. And try and use at least two types of cheese, preferably three. I like gouda, cheddar, and havarti the best in mine.


And for further enlightenment, I present Thomas Jeffersons notes on, and drawing of, a macaroni machine. 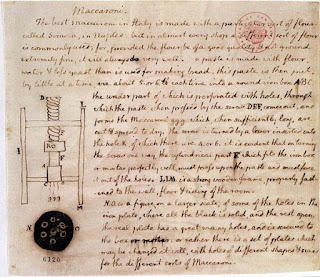