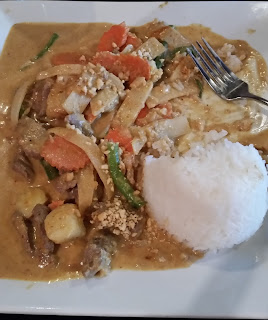 I like to try lots of new foods so we also go to lots of different restaurants. But Chiriya's is the one we go back to quite frequently. I'd say about 50% of our meals out are there. It's sort of become "our restaurant". A place where we know we love the food, the owner knows us, and the environment is fun. It's a little out of the way place on Thunderbolt, and doesn't look like much from the outside but is well worth the stop, it's always the first place I recommend to people when they want to know where to eat out in the area.

Having tried all of their curries and noodles by now I have to say my favorites are the massaman, the red, and the pineapple curries. The green is a close second, or fourth. And just because it came in fourth, doesn't mean it's not amazing.

For the kids, when we first started eating there they had no interest in curry and we got them the Special Noodles. The noodles are ramen like in shape, with sauteed vegetables and a teriyaki sauce on them.  But my description doesn't do it justice, it sounds rather mundane, but it's anything but. In true Chiriyas fashion its amazing. So HusbandMan and I got what we wanted, good Thai food, and the kids got something they liked. Only now, years later, the kids love the curries as much as we do. MiddleChild has even taken to trying something new every time to try everything on the menu. I can only eat about half of the stuff because of allergies, but they assure me it's up to par.