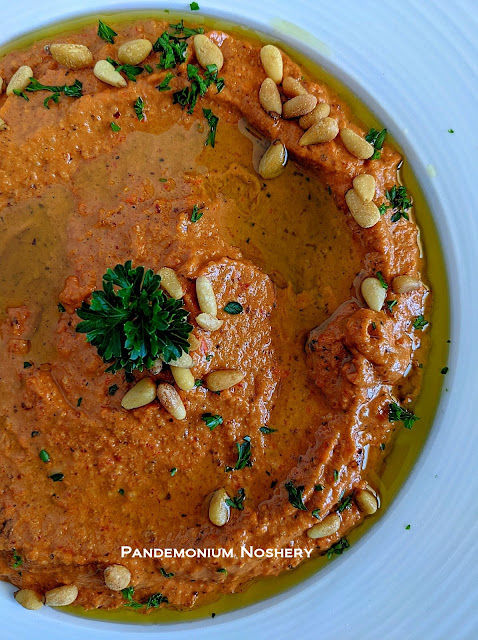 This dip originated in Syria and is enjoyed all over the middle east. Its roasted red peppers and enhanced with pomegranate molasses and garlic. The walnuts round it out beautifully.
Muhammara Recipe
2 Red Bell Peppers
1/4 c. bread crumbs
2 Tbsp. Pomegranate molasses
1 tsp. gochugaru (or Aleppo Pepper)
Dash cayenne pepper
1/2  lemon
1/4 tsp. cumin
2 cloves garlic, minced
1/2 c. walnuts
2 Tbsp. olive oil
1/2 tsp. salt
Nuts, parsley, and olive oil to serve
Pita
Add the walnuts to a dry pan and toast, stirring often, until toasted. Remove the nuts from the pan and remove the pan from the heat but leave the burner on. Add the whole pepper directly to the burner. Leave there until the pepper is blackened. Char on all sides and then place in a zipper deal bag or airtight container. Leave them in the bag for 10 minutes.
Remove the peppers from the bag and scrape the charred asking to remove it. Cut the pepper in half to remove the stem, ribs, and seeds.
Place the peppers, bread crumbs, molasses, gochugaru, cayenne, juice of half the lemon, cumin, garlic, walnuts, and salt, pretty much everything except the olive oil, into the food processor. Process until smooth. Then, while the processor is still running, drizzle in the olive oil and run for an additional 5-10 minutes.
Remove from the food processor and taste for salt/ lemon/ garlic/ etc... and adjust as needed.
Drizzle with olive oil and top with nuts and herbs. Serve with pita.
Labels: Kosher-Pareve Lebanon Middle Eastern Syria Vegan Vegetarian