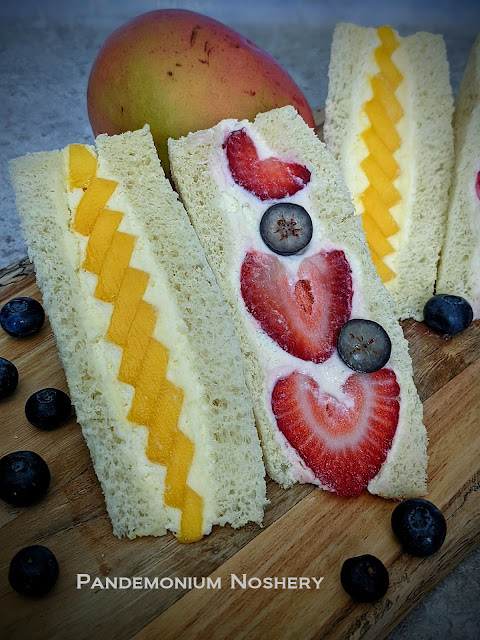 This is the perfect, most refreshing, summer treat that we all need. It's light and sweet, and fruity, and the bread gives it a nice chew, and it's just all-around amazing. It's also the perfect addition to this month's Improv Cooking Challenge with the theme of Blueberries and Dairy. I had several ideas, some savory, and some really unique. All of them would have been delicious but this recipe just really needs to be made, and I'm so sad I didn't get to it sooner.

Fruit Sando is believed to have been invented around the 1920s in Tokyo Japan. It's believed to have been created before then but was popularized in Shinjuku Takano Fruit Parlor in 1926. It's so popular it's still on their menu. Strawberry sando is the most popular, but strawberries, mangoes, and kiwi are the original. My favorite was the berries ones for sure.

The bread that is used is Japanese milk bread, a sweet enriched bread. There are recipes out there for making your own Japanese bread, but I went with something that was close. You want to use white bread, but one that isn't flimsy. The bread needs to have a bit of heft and solidity while being sweetish, and it needs to taste good on its own. Basically, you want something that is both sturdy and light. Also, nothing garlic flavored. I chose Aldi's artisanal loaf bread, which I think is a knock-off of Sara Lee's Artesano bread. Both are excellent. 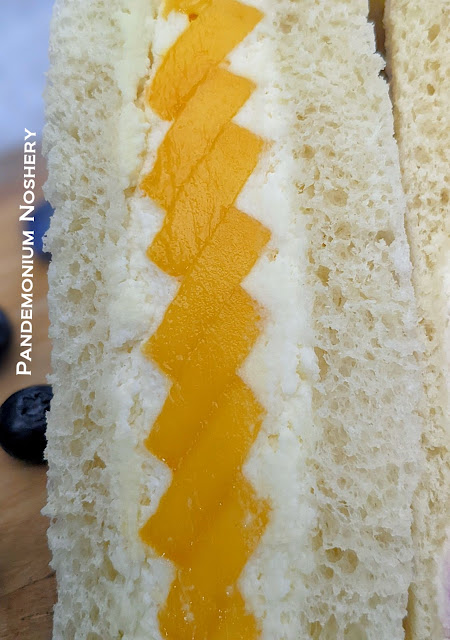 Fruit Sando Recipe
8 slices bread
2 c. heavy cream
1/2 tsp. vanilla extract
1/2 tsp. orange blossom water
1/4 c. sugar
2 pinches Xanthan gum
2 c. fruit (Strawberries, blueberries, oranges, mangoes, kiwi, grapes, etc...)
Place the whipped cream in a mixing bowl along with the vanilla extract, orange blossom water, and sugar. Mix on medium speed until starting to thicken. Turn the speed to high and keep beating until almost stiff peaks. Top the mixer and add the xanthan gum and then keep beating until stiff. Remove from the mixer.
Layer half of the slices of bread with a generous amount of whipped cream. Arrange the fruit on top and press the fruit into the cream. Plop a large spoonful of cream on top of the fruit and spread it smooth working it into the spots between the fruit. Top with a second slice of bread.
Repeat with all four sando. Wrap each one tightly with plastic wrap and place in the fridge for at least an hour, overnight is ok, but much longer and it starts to break down.
Remove from he fridge and remove the plastic wrap. With a serated knife cut the crust from the sandwiches and cut at an angle. Serve right away.
Extra note about cutting - Japanese food is all about being cute. If you arrange the fruit along the diagonal make sure and keep track of which way it's running. When you wrap the sandwich in plastic use a marker to put a line across where the fruit is arranged so you know where to cut it to get the cute design in the finished product. 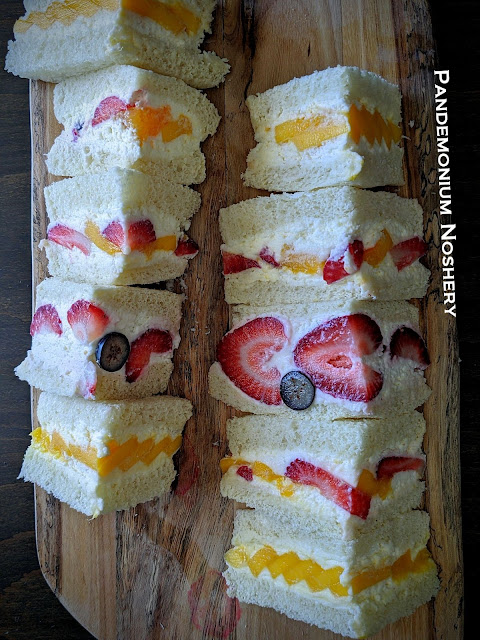