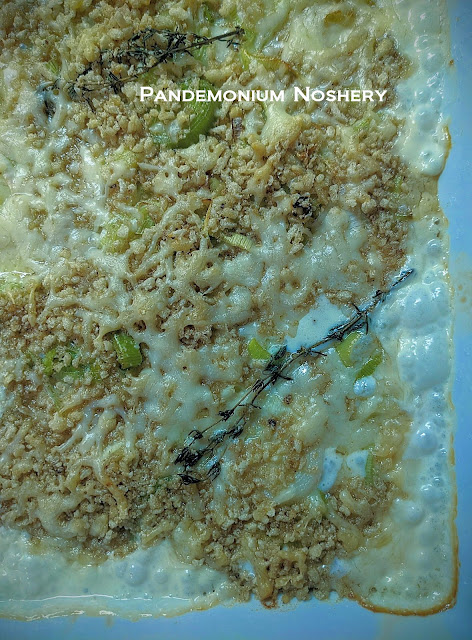 Oh wow, today's recipe is a doozie! It is decadent and savory and yet oh so simple. It's leeks cooked in butter, and then cream, and topped with cheese. It's not diet food and I love it. Leeks are a mostly forgotten vegetable in the states, not used very often and yet always there on the shelf at the grocery store. Do you know who hasn't forgotten leeks? The British. They are enjoyed in a plethora of ways and in many dishes. Creamed being a really simple reparation that pays off with a big reward.

Leeks are really sweet, when used in things like soups and stews that sweetness is reflected and I'm not always a fan. But in this recipe the sweetness goes great with the cream and is the perfect background to the crunchy panko and salty cheese.

The panko crumbs add a great crunch, both the traditional and the gluten-free forms. I had gluten-free company coming and tried them for the first time and was happy with it. Just toast them up and use them like normal

For the cheese any type of grated hard cheese is great. For this one, I use asiago because that's what I had but I usually prefer aged gouda as that is my favorite cheese. Other great pairings would be parmesan of course or manchego.

The cream at the end will be really bubbly and thickened and the leeks will be broken down and soft while still keeping their shape. they should also have a slightly more yellowed color and not be quite as fresh green when they are done. If you scoop into it and the leeks are still bright green and the cream isn't thickened just pop them bak in the oven for an additional 10-15 minutes.

Creamed Leek Recipe
6 leeks
1/4 c. butter, divided
1 c. heavy cream
1 tsp. salt (scant)
1/4 tsp. freshly cracked black pepper
2 sprigs thyme
2 oz. hard cheese
1/4 c. panko (regular or gluten free)
Trim the leeks, removing the roots and the tough green stalks. Separate the leaves and rinse really well, making sure to remove all the dirt. Leeks are really good at harboring dirt. Slice thin.
Heat half the butter in a skillet. Add the leeks and half the salt and cook, stirring as little as possible, until the leeks are starting to change color. Transfer to a baking dish and add the remaining butter to the skillet. Add the panko crumbs to the skillet and cook, stirring, until they are toasted and golden.
Grate the cheese and set aside.
Top the leeks in the casserole dish with the cream, black pepper, and remaining salt. Add the thyme sprigs and press into the cream and leek mixture.
Top with the toasted panko and the grated cheese.
Place in the oven and bake for 45 minutes or until the leeks are very tender, the cream is thick, and the cheese is golden.
Allow to cool for 5 minutes before serving. 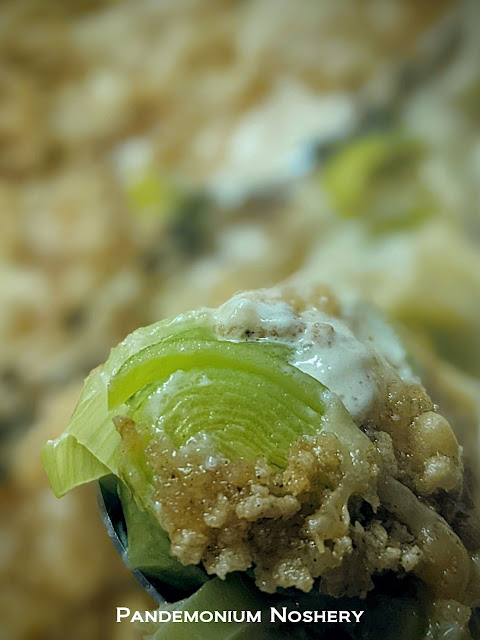