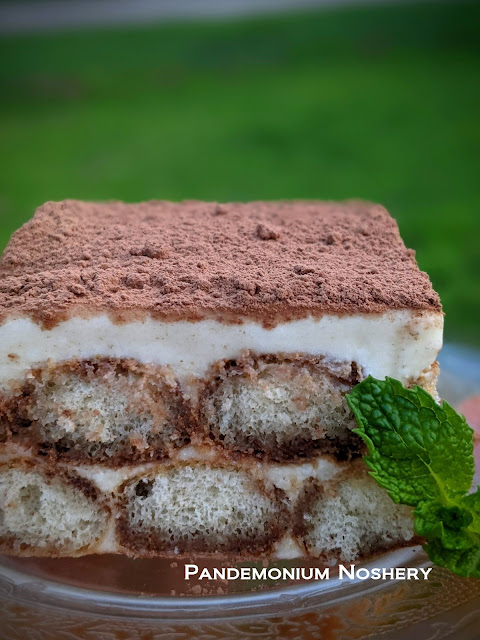 Tiramisu, an iconic Italian dessert.  It's a treat that is synonymous with decadence. It's also synonymous with coffee and alcohol, neither of which I consume. And so since I didn't think I could do it justice I decided to just leave it alone. But I don't leave anything alone. And so I finally got around to trying it. I even googled recipes on how other people might have tried it. I ran across a post from a The Stay at Home Chef, she had lived in Italy and also didn't eat either for cultural reasons. And she pointed out that in Italy there are groups that make it with chocolate, so I felt a little better about trying it my way.

There are two things that are issues. The first is the coffee in the base, the ladyfingers need to be dipped in something to soften them up and add some flavor. For this, I went with some Kaffree Roma, a coffee substitute with a dark, roasted, flavor. I decided to supplement that with cocoa powder. Not the kind you use for hot chocolate, but pure, bitter, cocoa powder. Because it doesn't just mix into the water right away I made sure to simmer it a bit first.

The second issue was the alcohol. Part of the problem was I had no idea which one to use. Some people said sherry, some said marsala. Other recipes used rum, and then people use Kalua too. So in the end, I decided to just skip it all. So the top of mine is mascarpone and vanilla flavored. That's all. I regret nothing.

For the cocoa powder on the top, you really get the rich, bitter, flavors of the cocoa. You want them to shine so you a good quality cocoa powder. I haven't found a store brand that I like, even the more well-known brands you can find at the grocery store aren't going to be stellar. Look for a really dark, richly colored, kind found at a kitchen store or specialty market.

Can I say this one tastes exactly the same and you won't notice the difference? Not really, I've never had the "real thing" so I really have no idea what it should taste like. But I can say it's a delicious dessert on its own. I regret nothing.

This month the theme for the Improv Cooking Challenge is Chocolate and Coffee. Even though I am, er, fudging, the coffee portion this is my contribution and below are all the delicious things everyone else made.

Chocolate Tiramisu Recipe
24 lady fingers
2 Tbsp. cocoa powder
1 Tbsp. kaffree Roma powder
16 oz. mascarpone cheese
4 eggs, separated
1/2 c. sugar
2 tsp. vanilla extract
1 c. heavy whipping cream
pinch xanthan gum
1/4 c. cocoa powder
Bring a cup and a quarter of water and the cocoa powder to a boil. Remove from the heat and add the kafree roma powder, stir to combine and set aside.
Heat a a large, wide, sauce pan full of water until simmering. Combine the egg yolks, the vanilla, and the sugar in a large metal bowl. Place the bowl over the pan of simmering water, making sure the bottom does not touch the water. Heat, whisking vigorously, until the sugar is dissolved and the egg is slightly thickened.
Whip the egg whites until stiff. Removed from the bowl and set aside. Whip the heavy cream until soft peaks are formed. Add the xanthan gum and continue beating until still peaks. Remove from the bowl and add the cheese, beating until smooth. Add the egg yolk mixture to the bowl with the cheese and mix until combined. Place the heavy cream and the whipped egg whites in the bowl, mixing this time by hand. Mix, in a folding motion, until combined.
Spread a few tablespoons of the cream mixture in to the bottom of your pan. Dip a lady finger quickly into the chocolate mixture. Don't leave it in long it it will be soggy. Hold up over the chocolate mixture to allow the excess to drop back. Arrange 12 dipped lady fingers in the bottom of the dish. Top with a few more tablespoons of the cream mixture. Repeat the dipping process with the lady fingers. Top with all of the remaining cream mixture. Spread to smooth the top and refrigerate for 8 hours.
Remove from the fridge, dust with the cocoa powder, cut in to squares, and serve.
Labels: Italy Vegetarian