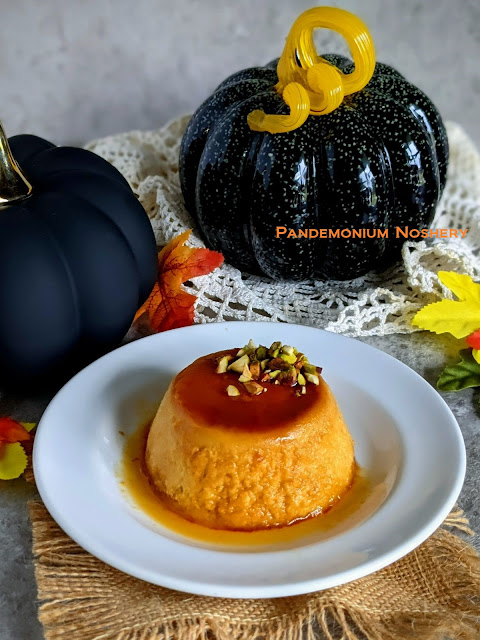 Flan de calabaza, or pumpkin flan, is delicious. I'm sure you already knew that. I even suspected that, but gauging by the number of years it's taken me to get around to this recipe I wasn't really sold. And I was wrong. Flan is popular all through Latin America, in fact it is probably the most well loved dessert. But it turns out it didn't originate there, no, in fact it started with the Romans! Who would have though? They fell but flan was more resilient and hung around, eventually being embraced by the Spanish. The Spanish of course brought it with to the Americas. And there it was adopted, claimed, and made with love on a regular basis.

Regular flan is typically eggy, vanillay, custardy and baked in a caramel glazed pan. This flan is no different except it includes the delightful fall flavors of pumpkin and spice as well. But just a hint, this is all about the pumpkin. They are there to compliment but not be the star. And really there are just a pinch of them both. You can add any you like, or increase them in you want. But I went with just a pinch of allspice and the very non traditional middle eastern spice I add to everything, mahalab. It's like eating all the best spices, with a hint of fruity goodness, while not being like anything you have every used before. I highly recommend it. It's easy to source at a local Middle Eastern market but if that's not an option Amazon carries it in large quantities too.

Pumpkin Flan Recipe
2 cans sweetened condensed milk
2 cans evaporated milk
1 (15 oz.) can pumpkin puree
6 eggs
2 tsp. vanilla
Dash allspice
1/2 tsp. mahalab (optional)
3/4 c. sugar
Heat the sugar in a saucepan over medium high heat. Don't stir if you don't have to but be careful of hotspots so it doesn't burn. Once the sugar is melted add 1/4 c. of water and stir, it will really splutter, but stir until it is combined. Pour the caramel into the bottom of 9 ramekins and swirl it around to coat the sides of the dishes.
Combine the sweetened condensed milk, evaporated milk, and pumpkin puree. Heat gently to cook the pumpkin, you don't want it to boil. Remove from the heat and add the vanilla. If it's hot allow to cool slightly before adding the eggs. Whisk the eggs in to the pumpkin mixture and pour the pumpkin custard into the ramekins.
Place in a baking dish and add some water around the side about halfway up the ramekins. Place in the oven and bake for 60 minutes. Remove from the oven and allow them to cool. Place in the fridge overnight to chill.
To unmold
Labels: Central/ South American Cuba Dominican Republic Gluten Free Mexico Puerto Rico Spain Vegetarian