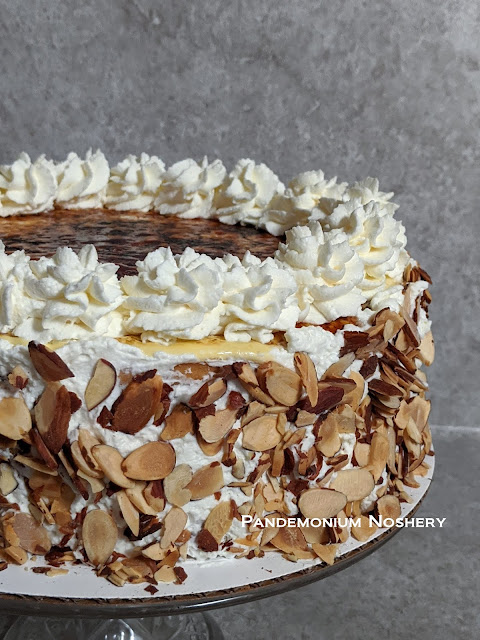 Welcome to the May edition of Baking Bloggers where we are sharing recipes from the baking of Spain. This delicious cake from Bake-Street is layers of tender spongecake that goosh from a simple syrup inspired by the flavors of Creme Catalan. In between the layers of sponge is a layer of chocolate cream and a layer of white cream. It is all topped off with an egg cream layer that is the perfect base for a creme brulee style torched top which is crisp and delicious.

I will admit, this cake has quite a few steps, but it is so, so, worth it. I start the cake and the syrup a day or two before assembling, along with toasting the almonds. Then when it's time to assemble it's the layers of cream and the egg topping and you are ready to eat. The pudding mix is obviously not traditional in the cream layer but it does two things. It stabilizes the whipped cream so it doesn't go flat and it thickens it so the texture matches the chocolate layer. The white chocolate pudding mix I have found to be the most neutral flavor.

In a bowl beat the egg yolks and 1/2 cup sugar until pale in color and thick. Sift the flour and salt over the top and fold in.

Pour the mixture in to a prepared pan and place in the oven. Cook for 20 - 25 minutes or until the top is springy but not browned.

Cut in thirds lengthwise and set aside.

Syrup
Combine all the ingredients for the syrup and bring to a gentle simmer. Simmer for 3-4 minutes and remove from the heat. Allow to cool completely, remove the cinnamon stick and orange peels, set aside until ready to assemble.

Chocolate Cream Layer
Combine the ingredients for the cream and whip until thick.

Cream Layer
Beat the cream and sugar until thickened but not quite even soft peak stage. Add the pudding mix and keep beating until thick.

Sweet Egg Layer
Bring a large pot of water to a boil.

Whisk together the egg and the corn starch and set aside. In a small saucepan heat the water, sugar, vanilla, and salt. Bring to a simmer and simmer for 3 minutes. Remove from the heat and allow to cool for 3 minutes.

Slowly drizzle the hot liquid in to the egg yolk mixture while whisking constantly. Do not stop whisking or the eggs will scramble.

While still whisking add the orange blossom water if using and place the bowl with the eggs over the large pot of boiling water. Keep whisking with the egg over the hot steam until the egg mixture thickens. This takes about 15 minutes.

To Assemble
Place one layer of the cake on a cake board. Sprinkle the cake with a generous amount of the simple syrup. Top with the chocolate cream layer. Spread it very evenly and all the way to the ends.

Top with a second layer of the cake and sprinkle with more simple syrup. Top the second layer with 2/3 of the whipped white cream layer. Spread all the way to the edges and smooth the top flat.

Add the third layer of the cake and a light sprinkle of the simple syrup.

Top with the granulated sugar and brulee until toasted. Refrigerate for 10 minutes.

Remove the cake from the oven. Pipe swirls of the cream on top of the cake covering the edges where the egg cream doesn't extend. Spread the remaining cream on the sides and press the almonds in to the side.

If you aren't serving the cake right away you can assemble the layer with the cream and add the sweet egg on top and the almonds on the side. Wait to torch the sugar until right before serving, it starts to dissolve after about an hour. 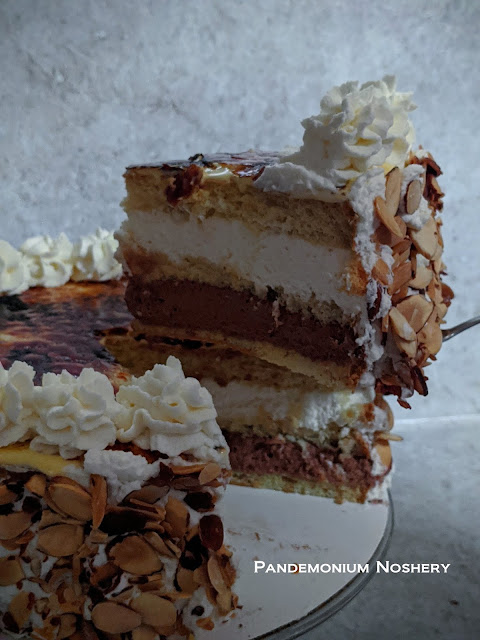