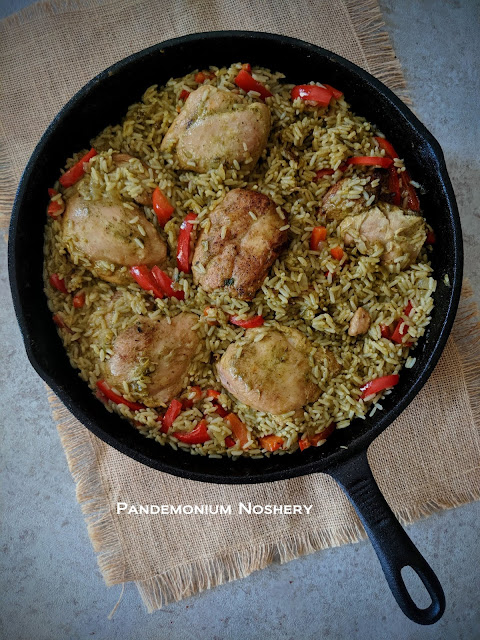 Peruvian Arroz con Pollo is a very traditional dish that is very vibrant in terms of both flavor and color. The awesome green shade come from blended cilantro. That, along with the aji paste and a variety of other seasonings make this dish stand way out. But don't let that fool you, this recipe is actually really simple to make. A little time consuming as it is made in three mains steps that have to simmer in between, but none of them are difficult or technical.

That means that Arroz con Pollo is a show stopper that anyone can make. And best of all it's not an expensive dish, with the bulk of the recipe being chicken, rice, and cilantro. The only really unique item, the one you won't find at most grocery stores, is the aji paste. I get it at my local hispanic market or Amazon carries it as well. I've started keeping it on hand since discovering how absolutely amazing it was when I made Aji de Gallina with chicken and then Papa a la Huancaina with potatoes.

So go grab a jar, and get cooking, I promise you will thank me later.

Heat the oil in a large cast iron skillet. Season the chicken with adobo and place in the hot cast iron pan. Cook the chicken until a dark golden brown, as dark as you can cook it without it being bitter and charred. Remove from the pan and keep warm.

In the same pan you cooked the chicken in, without cleaning it out, add the onion and cook for 4-5 minutes until browned in spots. Add the garlic and cook for 1 minute and then add the vinegar. Cook the vinegar over high heat until it's almost evaporated.

Add the chicken broth to the onion mixture and then add the chicken, along with any drippings on the plate, back to the pan. Cover and simmer gently for 30 minutes.

While that is cooking puree the cilantro and 2 tablespoons of water in a blender.

After 30 minutes remove the lid from the chicken and add the pureed cilantro, adobo, oregano, aji, bay leaf, cumin, and sofrito. Simmer the chicken, uncovered for 10 minutes to reduce the liquid some.

Stir in the rice and red pepper and work around the chicken. Recover and simmer for 15 minutes. Stir the rice to keep it from sticking and recover. Simmer and additional 15 - 20 minutes until the rice is tender. 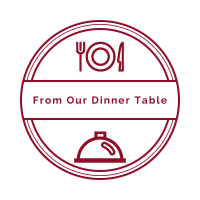 Best Rice Recipes for Dinner
We share Recipes From Our Dinner Table! Join our group and share your recipes, too! While you're at it, join our Pinterest board, as well!