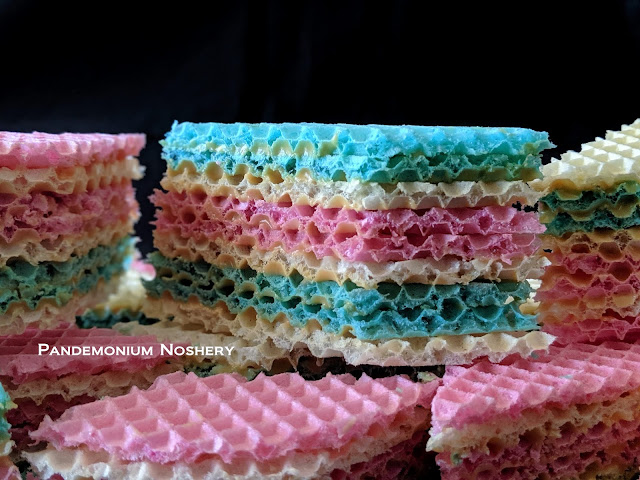 This awesome wafer cake is really popular in eastern Europe. You can buy it at most European markets cut in to little triangles but homemade tastes so much better. Which is ok, because it's also a super simple, no-bake, dessert.

Beat the butter until light and fluffy. Add the salt and dulce de leche and beat until smooth. Set aside

Spread some of the dulce butter on one layer of the wafer. You want to cover the entire thing, making sure to spread all the way to the edges and fill all the holes but not have it be a thick layer that can gush out the sides.

Spread the dulce butter on a second layer in a similar fashion and place on top of the first. Repeat with all the layers except the last. Don't spread it with anything and press on top.

Place a cutting board on top of the wafer cake and place a heavy weight on top, I used my cast iron skillet. Let stay for at least 2 hour.

Remove the weights and cut in to long strips with a sharp serrated knife. Cut the strips at an angle to create diamonds.

Enjoy right away or place in an airtight container in the fridge for up to 4 days.

I have heard it also freezes really well but I haven't tried it.