Russian Decorative Arts under the Romanovs 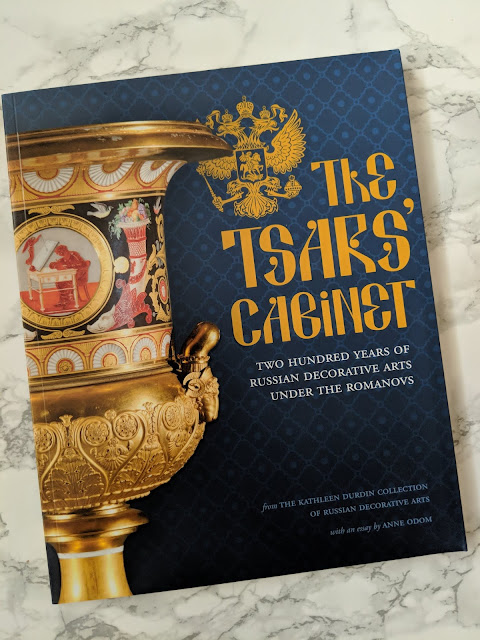 I've mentioned before, in an almost joking manner how I never intended this space to incorporate art. This was for food and food alone.And yet quite quickly I found I did in fact want to include art. This, my love to look at other cultures wasn't solely about food, it was about, well, culture. Something that to me is as evident in the art as it is the cuisine. Haveing been an art student, food became my new medium. The two will forever be connected for me.

It was no different for the Romanov dynasty. Their entire history was directly tied in with their china. It was evident in the amount, that it was expensive and showy. Then that the process because know in Europe and that too was reflected. Now instead of importing sets from China they could have pieces custom made. And they did. Did someones favorite general win a battle? Better send him a set of china with military armaments in the design. Love, betrayal, deceit, family, propaganda, wars and more were in all of the designs.

I would love to have included pictures of everything here. But for two reason you only get the cover of the book that goes along with the collection. The first part being that pictures are generally not allowed in art galleries. This is a shame, and I love it when they do allow it. I love being able to take a picture next to a memorable piece to be able to remember and enjoy later. But secondly, a picture doesn't do it justice, at all. I know, we enjoyed a lecture tonight that had a slide show, we also got a flyer in the mail. The photographs were nice, certainly lovely, but no where near the breathtaking, glittery, plates, cups, bowls, eggs, and urns.

Different rulers and eras brought different fashion but one thing remained the same. Everything was covered in gold leaf, and everything has it's own story.