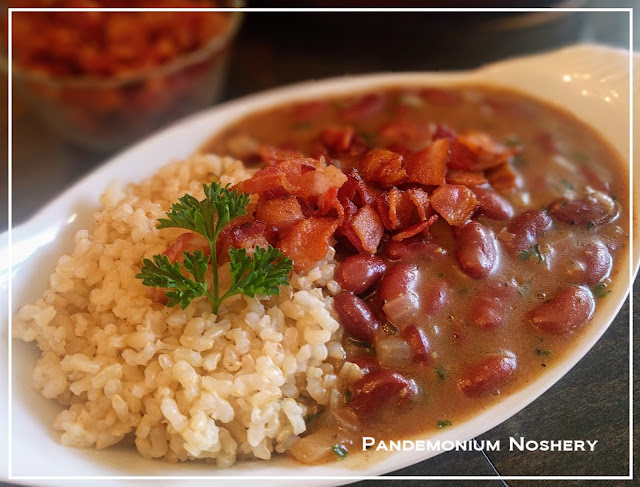 Recently we have had Chinese New Year on Monday and Fat Tuesday or Mardi Gras, and I just love a holiday with strong food traditions! While most people associate Mardi Gras with New Orleans, it's actually an old European customs predating the settlement of America. Admittedly, the old European versions were spring festival and nothing near the revelry New Orleans gives us.

This is a traditional southern style beans and rice, but not the most common version. I don't start with a mirepoix, the "holy trinitiy of Nola cooking, the bell peppers, onion, and celery. However it is by far the best bean recipe I have ever eaten. My mom used to make this recipe growing up, and it tastes like bacon. Both of those are irrefutable reason why this recipe is amazing. Since beans have a lot of protein on their own I don't usually crumble the bacon on top like my mom did. We have BLT's for lunch and reserve just the drippings for dinner, stretching it just a little bit. It does provide a nice crunch though if you do.

Since this is a much loved recipe, and it's hard to beat a classic, when this months Improv Cooking Challenge was announced as Beans and Rice I knew I would be sharing this recipe.

Cook bacon until nice and crispy and then remove from pan. I've found it's easier to cut it in to pieces before cooking and cook all at once, stirring, until browned. It doesn't sputter and pop like that and the bacon cooks very evenly. If you do, remove the bacon before adding the onion.

Add the onion to the bacon drippings and saute the onion in the bacon grease until tender. Whisk in the flour and cook until thickened, about 3 or 4 minutes. You also want to cook out the flour taste.

Combine the liquid from beans and enough water to make 2 cups, add to the pan and whisk in. Cook until thick and bubbly. Add the beans and remaining ingredients and simmer 10 minutes.

Top with reserved crumbled bacon and serve over brown rice.

*Notes on brown rice. I have two different methods for cooking brown rice instead of just boiling it. That way takes forever and tends to not cook very well on the stove. The first method I used years ago was to boil the amount of water needed and pour in a baking dish with the rice and salt. Cover with tin foil and bake at 425 for about 40 minutes until the rice is cooked. Stir once about halfway through.  I've started soaking it though and I like that because it cooks faster and the inside gets perfectly done. Just combine your brown rice and water in the saucepan you want to cook it in early in the day. I usually do it first thing in the morning. When you head in to the kitchen in the evening to cook dinner just turn the burner on. Bring it to a boil, reduce the heat and cover. It should be done in about 20 minutes. 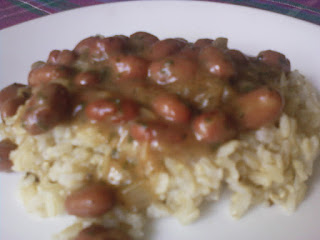