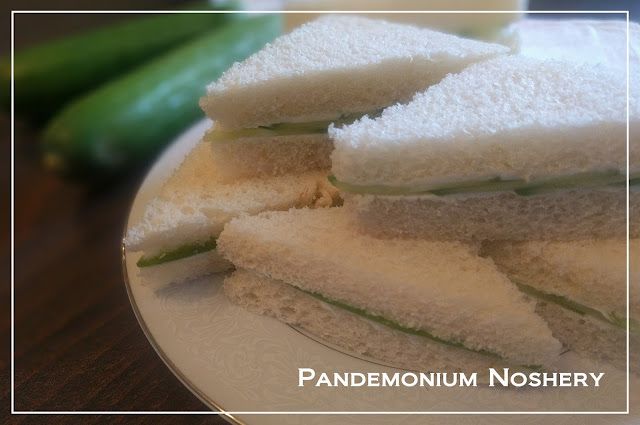 Cucumber sandwiches are something I have heard mentioned all of my life but never really thought much about. I usually get put in charge of food, so when I was asked for an English themed activity they came to mind. I had to use google to make sure I knew the specifics butt turns out they are pretty simple. The sandwich is to be a light refreshment, cucumber and butter on white bread with no crust. Usually a small sandwich, to look dainty. I decided to add my own spin on them to give them a little more flavor, something I could add while still keeping them light.

I didn't like the idea of wasting all the bread that gets removed so I spread them on a tray and bake them at 200, or just leave them out overnight, until completely dry throughout. Then I put them in the blender or food processor and make breadcrumbs.

Some things to know in making these. The bread is all white bread, the crust is removed. I found it was easier to cut the crust off the entire loaf at a time. Then make the sandwiches and then slice in to sandwiches.

For cucumbers use and English cucumber, or better yet the small pickling cucumbers. They aren't as wet and the sandwich wont get soggy. They are also traditionally peeled but with the pickling cucumbers I don't bother. I like the color variation an the peels aren't tough.

For the spread I like to mix softened cream cheese and butter and then season to taste with salt, a very little bit of  garlic, fresh herbs to taste. Spread it lightly on both pieces of bread before adding the cucumbers.

Use a sharp serrated knife to gently cut the sandwiches. Take care to saw them, don't use any pressure or it will squish the bread.

Enjoy immediately or cover tightly to avoid the bread drying out. I found with the pickling cucumbers they don't get soggy and can be made in advance. 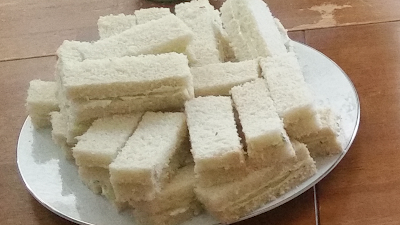