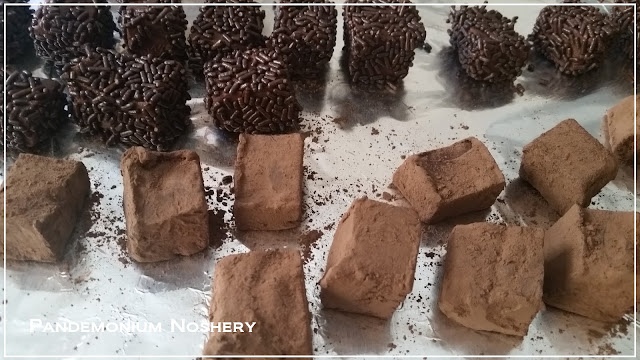 This post is perfectly timed for Valentines, and what I spent most of last week working on. Perfecting the art of the truffle. I'm not a chocolate expert, so I turned to someone who is. Alice Medrich is refereed to as "The First Lady of Chocolate". That works for me, we will go with her method.

A few things I learned along the way. First off the recipe is for a very dark chocolate truffle. Which is just fine for me but other people mentioned they liked them lighter. So I lightened them up a bit. I used 2 parts semi-sweet chocolate and 1 part milk chocolate, I replaced the water with half-an-half, and I added 1/3 c. sugar to the liquid as it was simmering. In one batch I added some caramel soda syrup to the recipe with delicious results.

But one of my favorite batches was the raspberry ones. I simmered a bag of frozen raspberries with almost a cup of water until the berries were broken down to a sauce. Then I strained the seeds, added 1/3 a cup of sugar and simmered until the sauce was reduced by almost half. I used that in place of the water and continued with the recipe as normal. They were amazing.

Another tip I learned along the way was not to double the batch. It doesn't break or anything, but my vitamix couldn't emulsify it all before it got too thick leaving a large portion of the top still gloopy. 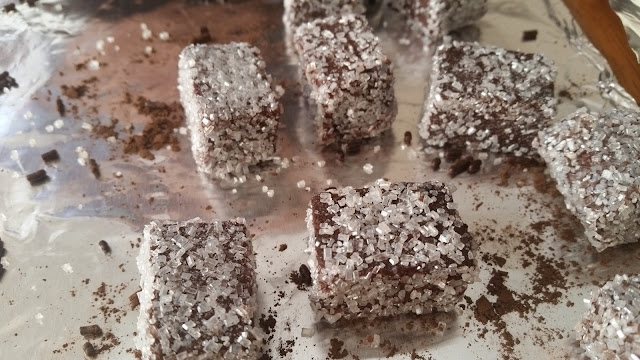 Combine the raspberries and water and simmer over medium heat until the berries break down and are a sauce. Strain out the seeds, I used the seed attachment on my Kitchen aid. A tool I highly recommend, just don't forget the splash guard. You will regret it. Return the mixture to the pan with the sugar and simmer until reduced by almost half.

Meanwhile, in a double boiler melt both types of chocolate and the butter. Keep stirring it until it's all melted and smooth and looks shiny and delicious. At this point stick you finger in it and taste for deliciousness. Is it delicious? Good, better double check. Still good? All right, probably time to move on to the next step.

Whisk the hot raspberry mix in to to the egg yolks, and keep whisking until mixed. Put in the vitamix and blend on high a few seconds to make sure there are no lumps. Pour in the chocolate and blend until mixed. Then keep right on blending until thick, and smooth, and beautifully glossy.

Pour the mixture in to a lined 8x8 pan and let it cool, and then chill until firm. Chop in to squares and dust with cocoa and try to share. 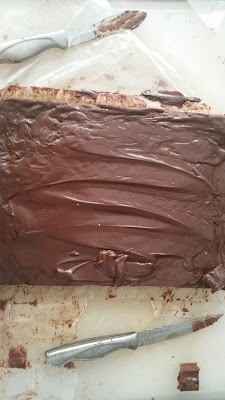 They don't turn out perfectly smooth on top but that is ok since you will be chopping and coating them, no one will know. Or care.